Along the East coast of Kyushu

Running down the east coast of Kyushu the journey between Oita and Miyazaki on the Limited express Nichirin or Nichirin Seagaia is a contrast of mountain and sea. 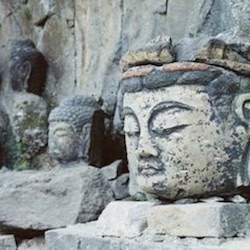 Running down the east coast of Kyushu the journey on the Limited express Nichirin or Nichirin Seagaia is a contrast of mountain and sea as you pass the lush interior of the island on one side and the sea on the other, sometimes just meters away. One train a day comes all the way from Hakata (Fukuoka) down to Miyazaki, taking over five and a half hours to make the journey of just over 400 km.
0 km -  OITA station
36 km - 0H28 - USUKI stationA very pleasant coastal town with free bike rentals in the station to explore the local coast. 5 km south of Usuki are the Usuki Stone Buddhas, which were carved in the 12th century. Infrequent buses take about 20 minutes to get here. 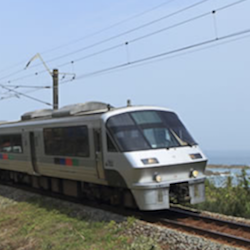 65 km - 0H57 - SAIKI station
Make sure you are sitting on the left -hand side to get the best views of the coast. If you are after some of the best pizza in Kyushu, alight here and head for Pizza Savoy.
123 km - 1H55 - NOBEOKA station
A town mentioned by Natsumi Soseki in his book Botchan. Alight here for a side trip to Takachiho.
127 km - 2H05 - MINAMINOBEOKA station
The southern station of Nobeoka passing through a very industrial district. 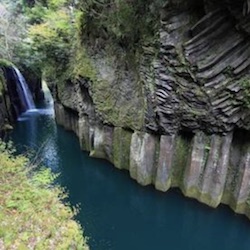 144 km - 2H12 - HYUGASHI station
A mecca for local surfers and close to the birthplace of the poet Wakayama Bokusui.
181 km  - 2H38 - TAKANABE station
Here the line hugs the coast over a long distance. 207 KM - MIYAZAKI station
Discover TAKACHIHO GORGE
Until 2005 a private railway would take you from Noboeka to Takachiho Gorge, but after a typhoon in 2005, the line stopped operating. Now, only a bus will take you to this marvelous site, in less than two hours. The gorge was formed from the lava of Mt. Aso being slowly eroded by the Gokase-gawa River. The beautiful gorge, which resulted has aquamarine water surrounded by volcanic basalt columns.
discover Aoshima

What to see ?
AOSHIMA
Aoshima is a small, beautiful island 30 minutes away from Miyazaki. With a circumference of around 1.5 kilometers, the island is surrounded by strange large rock formations called Oni no Sentakuita, the ‘Devil’s Washboard’. At the center of the island is Aoshima Jinja, a colorful shrine set back in the jungle that is said to bring luck to married couples. Take the JR Nichinan Line from Miyazaki Station to Aoshima Station. The island is about a 5-minute walk from the station.

Where to Stay ?
RICHMOND HOTEL MIYAZAKI EKI-MAE リッチモンドホテル宮 崎駅前
Right outside of the east exit of Miyazaki Station. Highly rated, with many amenities and great prices. 2-2-3 Miyazaki-eki-higashi, Miyazaki, 880-0879
Tel : 09-8560-0055 / http://miyazaki.richmondhotel.jp/

JIZOAN 地蔵庵
For a beachside hot spring ryokan stay, you may have to travel a little outside Miyazaki City, but the 25-minute JR ride to Kodomo no Kuni Station is well worth it. Each traditional Japanese room is elegant and unique, and a 5-minute walk from the beach!
1-6-4 Aoshima, Miyazaki, 889-2162
Tel : 09-8565-0039 / www.jizoan.jp

Where to eat ?
KAMAAGE UDON TOGAKUSHI HONTEN 戸隠うどん本店
Taste very thin udon served with a special sauce. From Miyazaki Station‘s west exit, go straight on the main road. Turn left onto Route 220. Take the first right and then the fourth left. The restaurant will be on your right after 300 m.
Open daily, 6 p.m. to 2 a.m. - Tel : 09-8524-6864

OGURA おぐら
The original, and still the best, spot for Chicken Nanban, Miyazaki’s well-known dish. A favorite with children and comes in huge portions. From Miyazaki Station’s west exit, go straight down the main road and turn left onto Route 220. Take the first le down a very narrow side street, and Ogura is at the end of the street just before it veers right.
Open 11 a.m. to 2:30 p.m., 5 p.m. to 8:30 p.m. Closed Tuesdays.
Tel : 09-8522-2296

How to go from Fukuoka to Nagasaki ?

Even more about 7 stars in Kyushu