Honshu to Shikoku by boat

As Japan is made up of so many islands, it is naturally home to an extensive network of ferry routes. Crossing the Inland Sea by boat, you will be able to admire the stunning scenery of its coast and its thousands of islands. 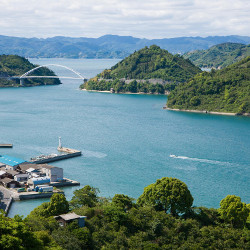 As Japan is made up of so many islands, it is naturally home to an extensive network of ferry routes. Japan’s four main islands, including Honshu and Shikoku, are connected with each other by bridges and tunnels, but ferries can be an interesting, if not particularly fast, alternative. Crossing the InlandSea by boat, you will be able to admire the stunning scenery of its coast and its thousands of islands.

According to Japanese mythology, the islands of the Inland Sea are the oldest part of the country. In history, the area around the Inland Sea was the scene of all three great battles of the civil war of the 12th century, between the Heike and Genji clans. 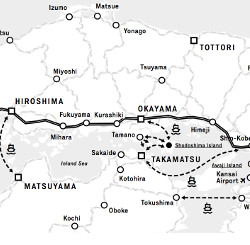 Hiroshima to MatsuyamaTwo kinds of boat service are available for this popular journey: 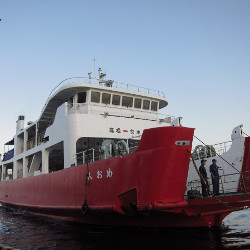 Hiroshima, Matsuyama, Kobe, Takamatsu, Wakayama can be reached by train and a Japan Rail Pass. 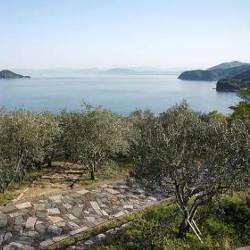 Shodo Island, which can be reached from Takamatsu, as well as Okayama and Uno. It is the second largest island. Most Japanese know one thing about Shodo  it is the only place in Japan whereolives are grown. The island has some ne scenery, including a gorge inhabited by monkeys, but best of all are the beautiful views out to sea.
Naoshima Island is known for its many contemporary art museums. For example, the Chichu, which houses a number of installations by James Turrell, Walter De Maria, and paintings by Claude Monet. Another contemporary museum (and hotel) is Benesse House, designed by Tadao Ando. There is also the James Bond Museum, inspired by the island being used as one of the settings for the 2002 Bond novel. The Man with the Red Tattoo by Raymond Benson. Boats leave for Naoshima from Uno Port.

Itinerary : How to go from Okayama to Uno with a Japan Rail Pass ?