The Choshi Dentetsu Railway (Choshi Electric Railway) is a private railway line connecting Choshi JR Station to the outlying coastal attractions of Choshi in Chiba Prefecture, as well as to a number of sights in the city itself. 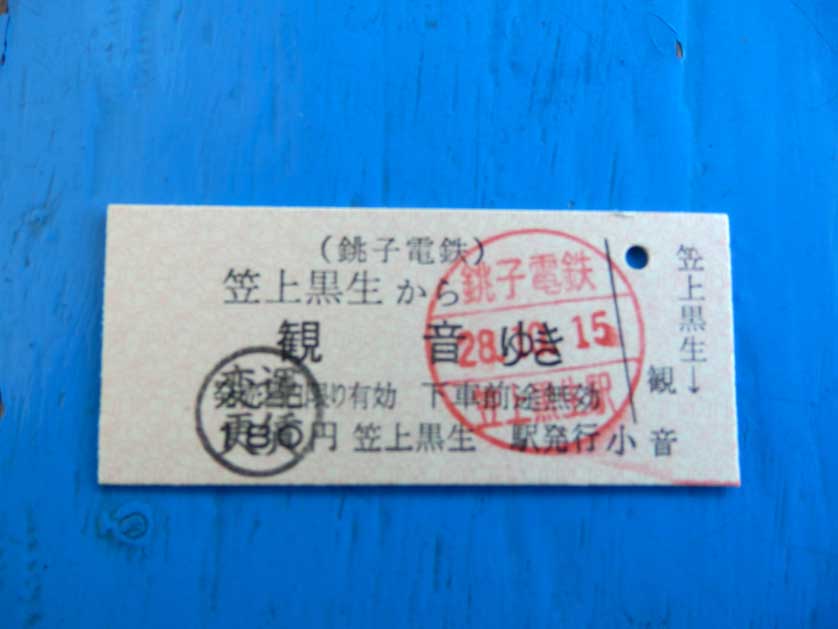 Visitors can change from the Japan Railways (JR) system to the Choshi Dentetsu Line right at Choshi Station. A separate ticket, printed in vintage fashion on thick cardboard, featuring no electronic inscription at all, must be bought to ride the Dentetsu Line. SUICA or PASMO IC cards are not accepted by the Dentetsu Railway.

The Dentetsu Line trains make nine stops (after leaving Choshi Station) before they reach their terminus at Tokawa Station in the old fishing village of Tokawa after covering a distance of 6.4 km in about 28 minutes. Trains run about once an hour, a ticket for an adult covering the whole trip is 700 yen one way. 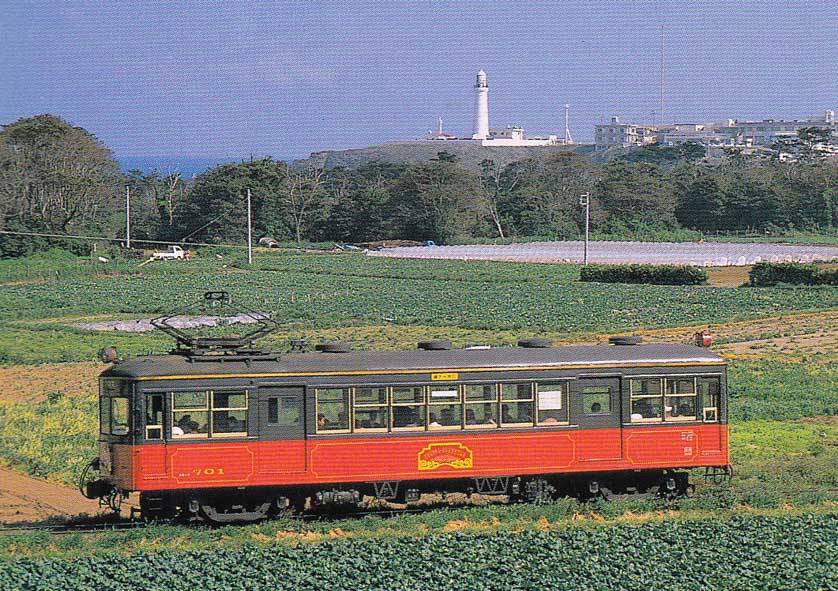 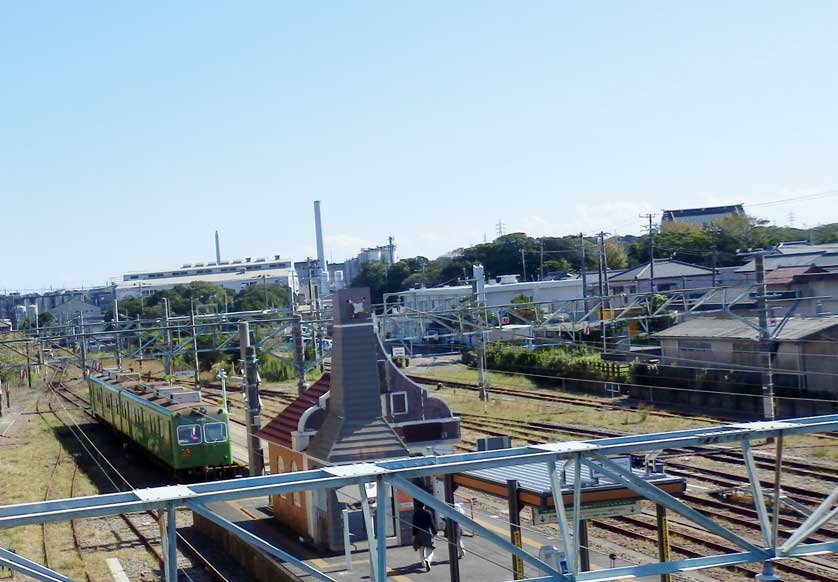 The train yard of the Dentetsu Line is located at this station. Many historic trains and locomotives are parked here as well as current rolling stock. Nakanocho Station is the place to visit for train spotters and railway fans. 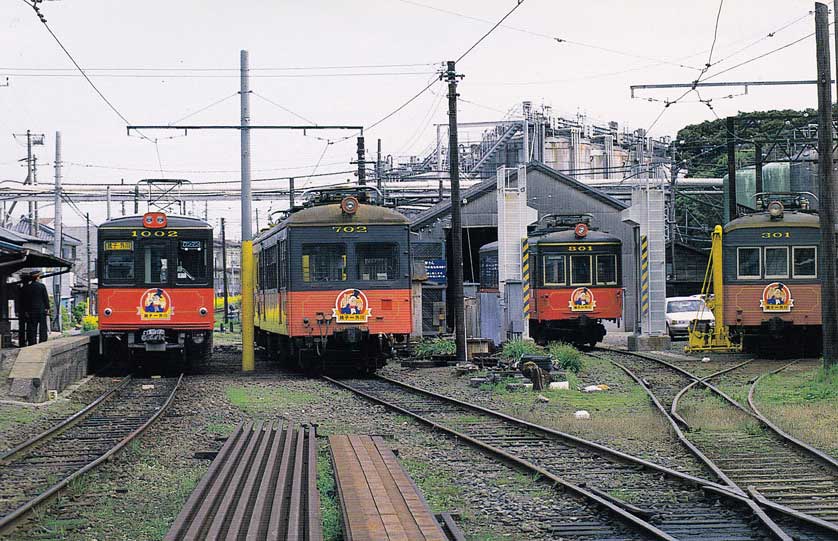 Access to the Iinuma Kannon Temple and Choko Shrine (next to the temple) as well as to the Wholesale Fish Market Number 1 where tuna and marlin auctions can be witnessed in the morning. 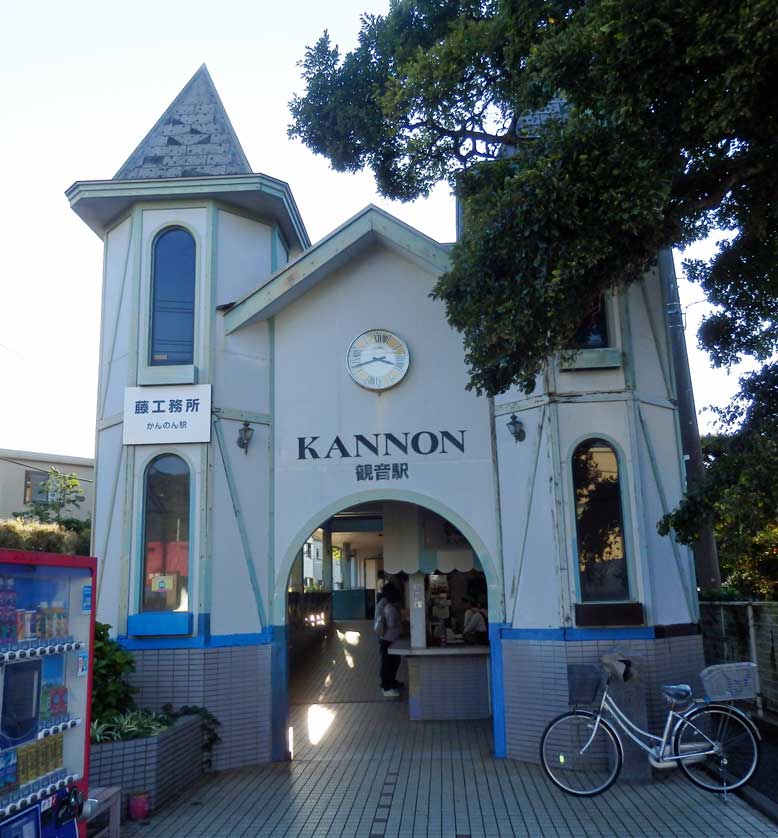 The Choshi Dentetsu Line is single track. Kasagami Kurohae is the only station where trains going in opposite directions can pass each other.

Choshi Port Tower and the Wosse 21 Fish Market are in walking distance. Read more on the tower and the fish market as well as on how to get there. 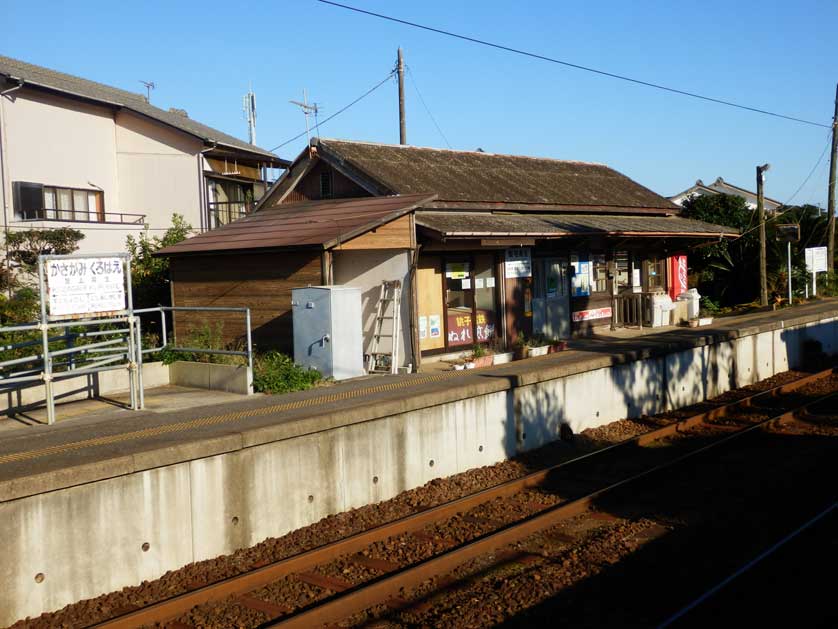 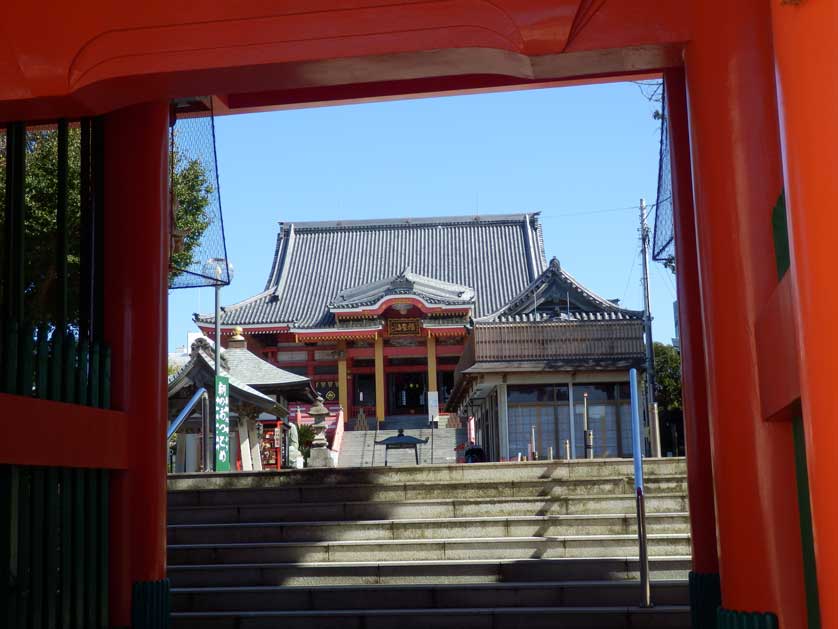 This unstaffed station is the newest of the line, opened in 1970.

The park, consisting of pine forest close to the cliffs is located at about the easternmost spot of the Kanto area. It is very popular for its sunrises, especially by people who want to greet the New Year by watching the New Year's Day sunrise (the same applies to the nearby Inubozaki Lighthouse, see below). 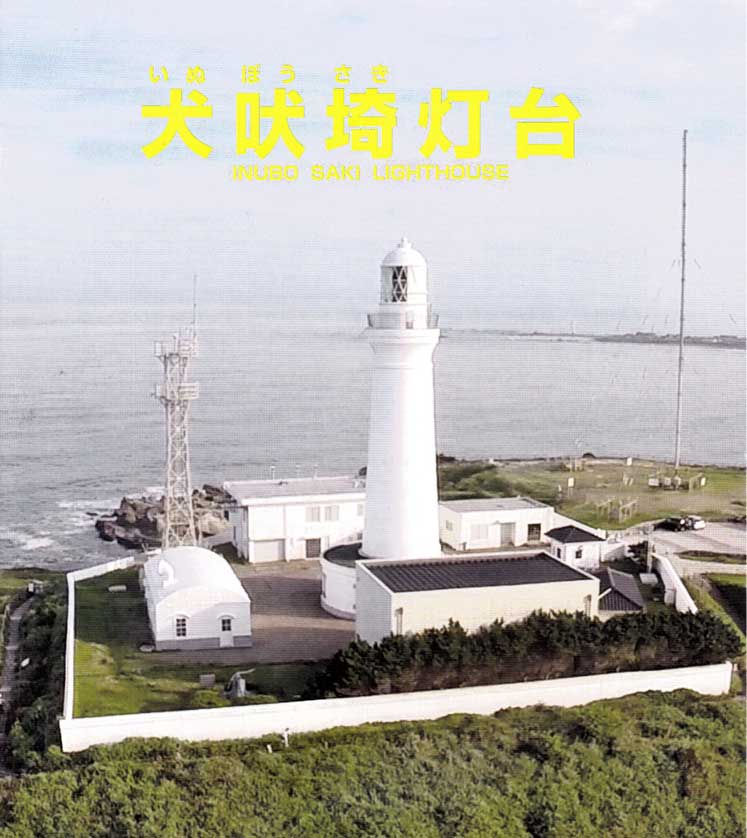 Access to the historic Inubozaki Lighthouse, one of the most famous lighthouses in the Kanto area. It was built by British engineer Richard Henry Brunton in 1874. The lighthouse is open to the public. Very popular for watching the first sunrise on New Year's Day.
Opening times: daily 8.30 am to 4 pm, closed in bad weather
Admission: adult 200 yen, children free
Address: Choshi City, Inubozaki 9576
Tel: 0479 25 8239
Website: http://www.tokokai.org/archive/history/08.html (Japanese)

Access to the Chikyu Tenbokan Horizon Observatory on Mount Atago. This observatory offers a 330 degree view over the sea and claims that you can experience the bend of the earth by looking out over the ocean. Mount Atago is a very rare spot in that you can watch a sunset over the sea on the East Coast of Japan.
Opening times: April to September 9 am to 6.30 pm, October to March 9 am to 5.30 pm
Admission: adult 380 yen, primary and middle school students 200 yen, seniors over 65 years old 330 yen
Address: Choshi City, Tennodai 1421-1
Tel: 0479 25 0930
Website: http://www.choshikanko.com/tenbokan/ (Japanese)

Inubo has several hotels. If you plan to watch the Choshi sunrise, you will have to stay at one of those. The Inubosaki Kanko Hotel has its own hot spring source and offers onsen baths. The nearby Inubosaki Hotel (the closest to the Inubozaki Lighthouse) and the Hotel New Daishin also offer hot spring baths. 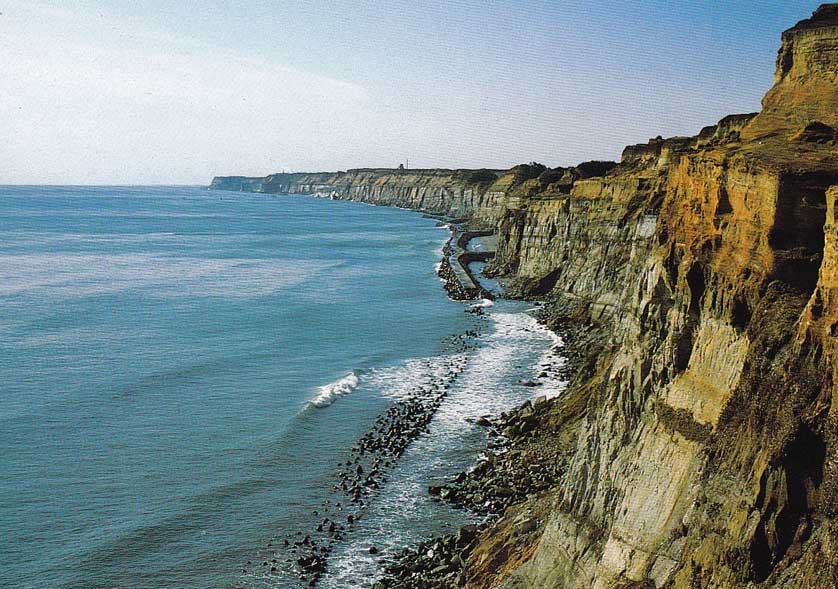 This is the terminus of the line. The historic streets of Tokawa, an old fishing village, are worth a stroll.

It's a longer walk to the Byoubugaura Cliff, a spectacular rock cliff stretching along the sea for several kilometers.

The Byoubugaura separates the Choshi Peninsula from the 60 km long, flat, sandy Kujukuri Beach to the south.

The line was first opened as Choshi Yuran Tetsudo (Choshi Sightseeing Railway) in 1913. It ran from Choshi Station to Inubo, with only four stops in between. Low passenger numbers led to the closing of the line in 1917, despite protests by local commuters.

The track bed was converted into a road traveled by buses while the stations remained intact.

Service was interrupted for several months in 1945, after American bombings destroyed parts of the tracks. The line went back into operation in December 1945.

In 1948, the line was renamed Choshi Dentetsu Railway (Choshi Electric Railway). The line never made much money and was often threatened by bankruptcy. Local demand however keeps it in business, Choshi City subsidizes the line to serve tourists and residents alike. 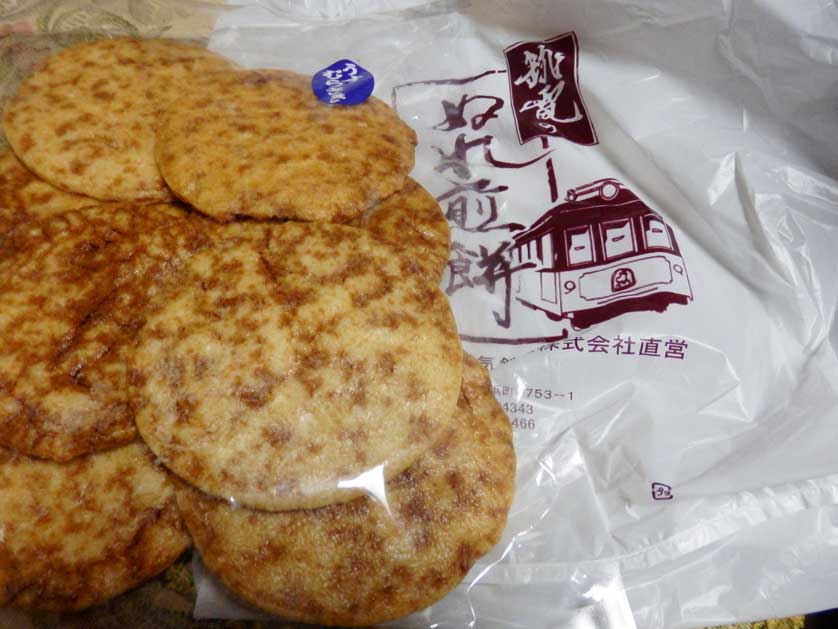 Nure-senbei are moist rice crackers which are dipped in soy sauce while still hot from the baking. They were invented in about 1960 in Choshi, famous for its soy sauce production, and have been a local specialty ever since.

In the early 2000s, the Choshi Dentetsu Railway began selling their own brand of nure-senbei at all manned stations to create financial support for their train operations. By now, the profits generated with the rice crackers are much higher than the earnings achieved by passenger ticket sales.

Buy a pack. They are tasty, make good gifts and keep the wheels of the railway rolling.

If starting from other Tokyo locations, the Sobu Line would be a good option. It runs all the way from Shinjuku Station through downtown Tokyo to Chiba Station, stopping at every major station in between. Change in Chiba to the Sobu Main Line Local Service to Choshi. 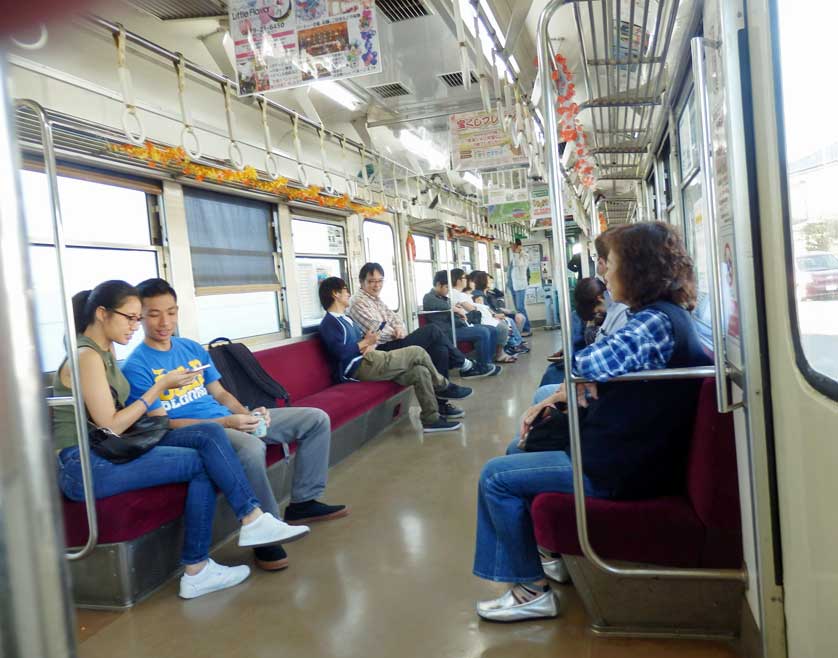