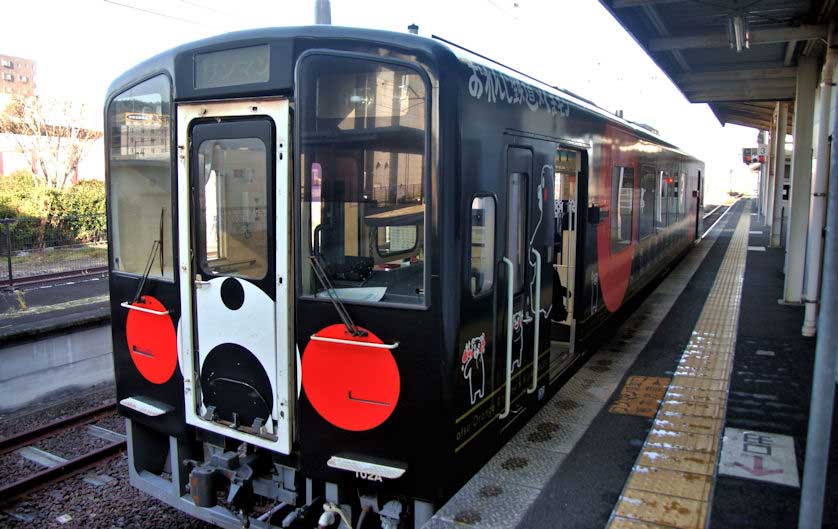 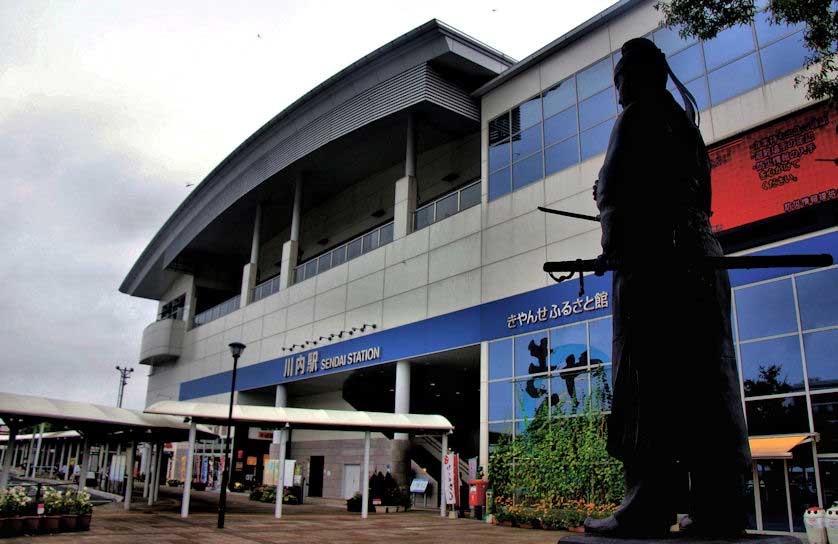 Sendai Station in Kagoshima with services on the JR Kagoshima Line, the Kyushu Shinkansen, and the private Orange Hisatsu Railway

Hisatsu is derived from the old names for Kumamoto Prefecture and Kagoshima Prefecture, Higo and Satsuma.

The orange refers to the numerous and plentiful citrus fruits that are grown in the region.

It began operations in 2004 on a section of the former JR Kagoshima Line that closed down when the Kyushu Shinkansen to Kagoshima-Chuo Station came into operation.

At both Yatsushiro and Sendai the line connects with the JR Kagoshima Line. The route mainly follows the coast of the Yatsushiro Sea which separates the mainland of Kumamoto from the Amakusa Islands. 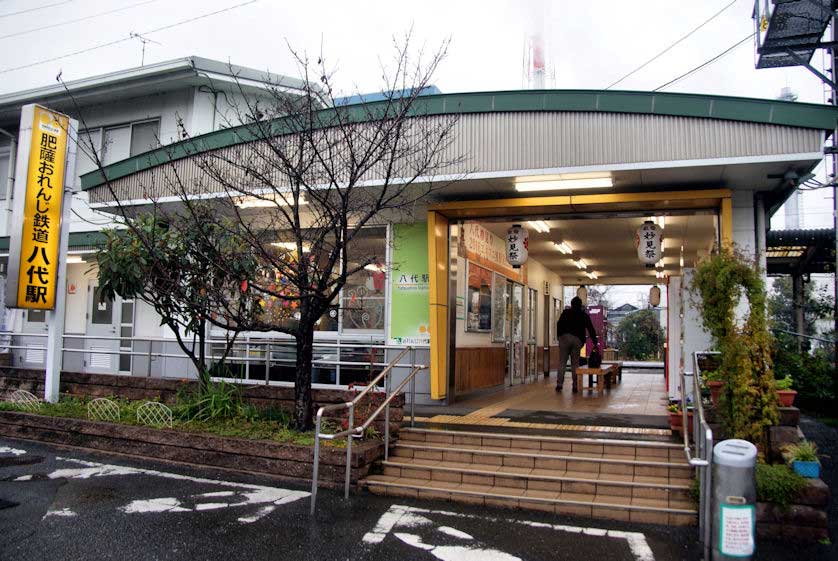 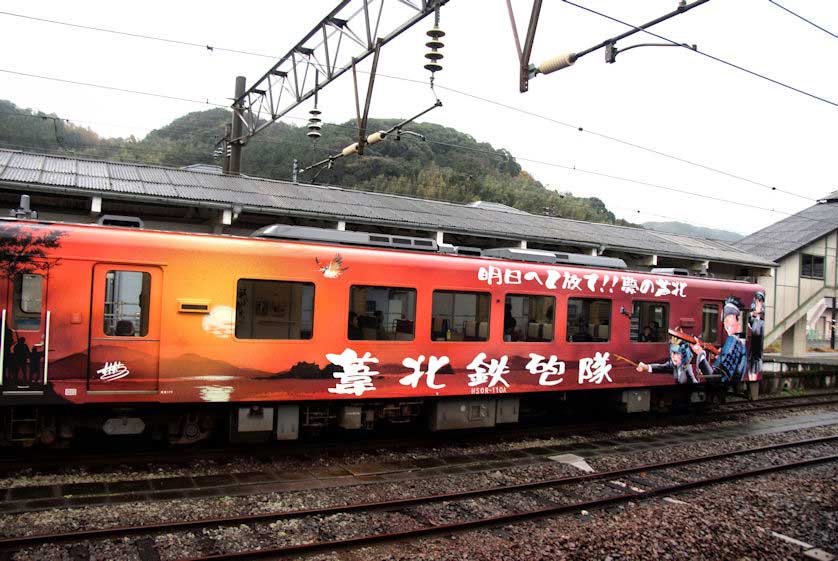 One of the decorated trains of the Orange Hisatsu Railway

There are a total of 28 stations on the 117 kilometer route including 4 stations that connect to the Shinkansen line.

Mostly only local trains run on the line and the time for the whole journey is a little under three hours. Izumi, famous for its cranes in winter is about half way along the line. The fare for the whole length is 2,620 yen.

The JR Rail Pass is not usable on the line, but the railway has a One Day Pass for foreign visitors for only 1,200 yen, or a Two Day Pass for 2,000 yen, obtainable from Sendai, Izumi, or Yatsushiro stations. 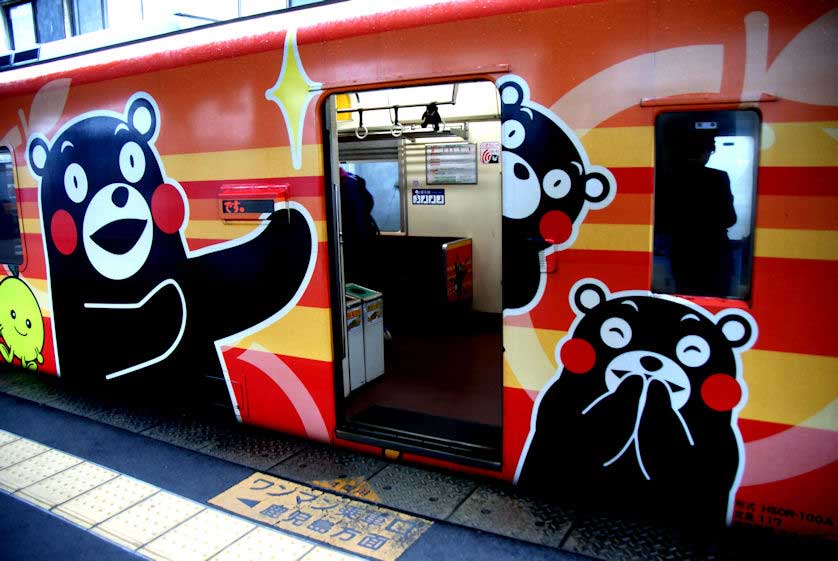 Another of the Kumamon themed trains on the Orange Hisatsu Railway

Like most Japanese local trains, it is possible to take bicycles onto the train for no charge if the bike is disassembled and put in a bag.

However the Orange Hisatsu Railway advertises itself as a cycle train because you can rent folding cycles at Yatsushiro, Sendai, or Sashiki stations and take them onto the trains without disassembling or bagging.

The cycles can be returned to a different station than from where it was rented, and the charge is just 500 yen a day. Bikes for very young kids are not available.

Some of the trains on the railway have external decorations, the most popular being three trains that sport different Kumamon designs.

Kumamon is the mascot character for Kumamoto and is based on a black bear. It is one of the few local mascots that have become popular outside their own areas and has spawned a large number of Kumamon souvenirs and paraphernalia.

Each of the three trains has a different exterior paint job and also includes interior decorations and even small Kumamons on the seats and attached to the overhead handrails.

The most famous train on the Orange Hisatsu Railway is called the Orange Restaurant. It is a gourmet dining train offering an ever changing seasonal menu composed of local foods and drinks. It is not cheap, and is sometimes booked a long time in advance.

There are four different journeys which usually run on weekends and holidays. The first is the morning course which runs from Izumi to Shin Yatsushiro. It includes a sandwich and coffee for 4,000 yen.

The most popular course is the lunch course which runs from Shin Yatsushiro to Sendai and costs 21,000 yen.

It is possible to book a seat on the train with the set meals and purchase drinks from the onboard bar.

Details, in Japanese with a little translated information into English are on the company's website 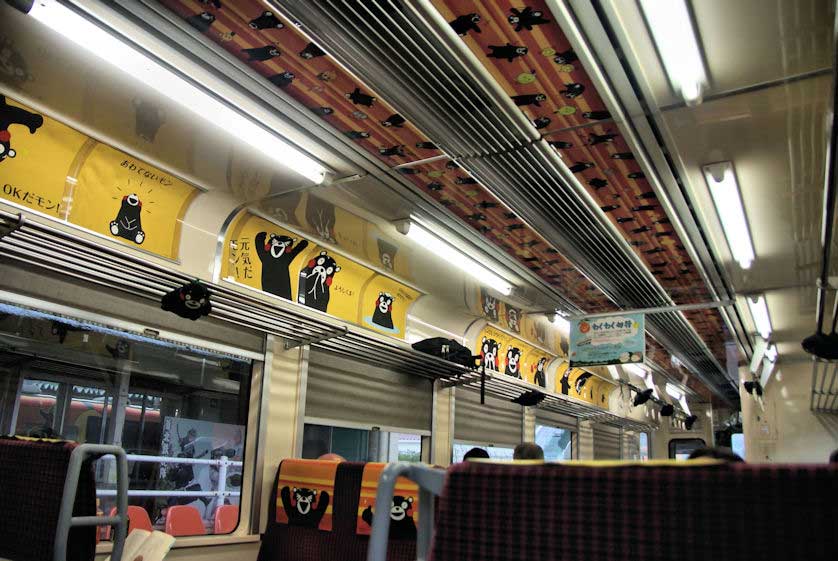 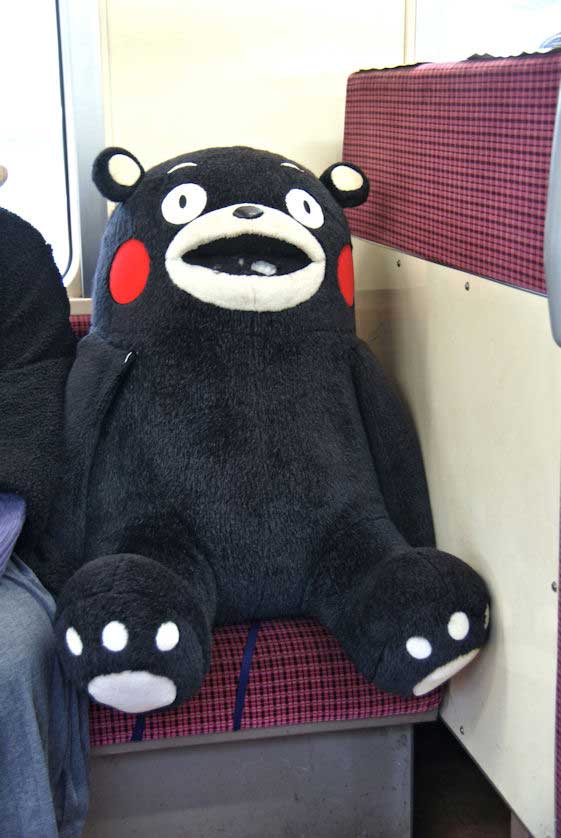 Kumamon, the mascot of Kumamoto, on a Kumamon themed train