What is the Japan's longest railway bridge ? What is the longest train station name in Japan? Learn some fascinating trivia about the amazing Japan Railways! 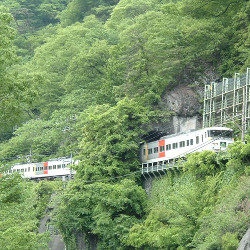 Japan is an extremely mountainous country, and many of its train tracks and roads include tunnels that cut through mountains of all sizes. The shortest tunnel is the Tarusawa Tunnel, at 7.2 meters long. This tunnel is part of the journey between Iwashima and Kawarayu Onsen Stations in Gunma Prefecture. This route runs along a valley with a beautiful view, but a new dam in the works is causing some controversial changes. When the dam is finished, new tracks will be laid, and the tunnel will be submerged in the dam. 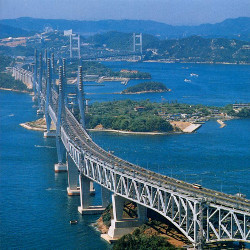 Currently, Japan's train system has two world records. One is the world's longest train bridge, the Seto Ohashi Bridge. This bridge is actually a long string of connected bridges across the water when going from Okayama Prefecture on Honshu to Kagawa Prefecture on Shikoku Island. The bridge was opened in April 1988 and is a total of 9,368 meters long. There's even a space on this bridge for shinkansen tracks, whenever the time comes.

(By the way, the other world record is the world's longest train tunnel, the Seikan Tunnel, which connects Aomori with Hokkaido.) 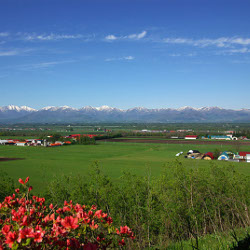 The Japanese have a habit of naming the "best three" of many things, such as the best three sights and the best three festivals, and the best three train views is no exception. The first on the list is Ubasute Station on the Shinonoi Line, where you can see the Zenkoji Plain and the Chikuma River. Next on the list is on the Hisatsu Line, between Masaki and Yadake Stations, where you can see the Kirishima Mountain Range and Ebino Basin. The last is on the Nemuro Main Line, which used to run through Karikachi Pass, from where you could see the Tokachi Plains. This last one was rerouted way back in 1966, but it still keeps its title, and can now be experience via a nearby highway.

Japan has an ongoing war for the longest station name. The current titleholder is "Minami Aso Mizu no Umareru Sato Hakusui Kougen Station," which is a station close to Mt. Aso in Kumamoto. However, until 2007, the winner was "Luis C Tiffany Kougen Bijutsukan Mae Station," in Shimane Prefecture, named after the park and art museum accessed by that station. Unfortunately, in 2007, that museum closed down.

Covid-19: How to cancel my trip to Japan

Do I need a Japan Rail Pass during the Rugby World Cup 2019 ?

Do I need a Japan Rail Pass during the Rugby World Cup 2019 ? here is our guide.