The Cassiopeia Overnight Train was a famous night train in Japan between Tokyo and Hokkaido. The service was in operation until  the launch of the Hokkaido Shinkansen in March 2016.

From Where to Where? Tokyo to Hokkaido

The Cassiopeia departed from Ueno Station in Tokyo at 4 pm and made its first stop in Hokkaido around 5 am, when it reached Hokkaido. In between, the Cassiopeia stoped at Omiya, Utsunomiya, Koriyama, Fukushima, Sendai, Ichinoseki, and Morioka. The train ended in Sapporo around 9:30 am in the morning.

The Cassiopeia made its debut in 1999. Because it was a "cruising train," or special luxury train, it was only equipped with private rooms, each of which had an in-suite bathroom.

The beds folded out at night, and up into chairs during the day so that you could enjoy the spectacular view as your travel further and further north. 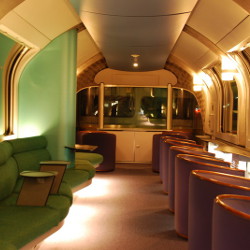 The train was also equipped with lounge and dining cars.

The new Kyotrain between Osaka and Kyoto

Recently the Hankyu Railways announced that starting from march, a new beautiful train will be added to link Osaka and Kyoto : the new Kyotrain Garaku.

Yufuin no Mori from Fukuoka to Yufuin and Beppu