The Kawasemi-Yamasemi, Kingfisher Sightseeing Train entered service in 2017 and runs between Kumamoto and Hitoyoshi in Kyushu.

The Kawasemi Yamasemi Limited Express Sightseeing Train entered service in 2017 and runs between Kumamoto and Hitoyoshi Station in Hitoyoshi in Kyushu.

The Kawasemi Yamasemi Limited Express is a designer train. These are trains that may or may not have decorative exteriors, but do have an unusual interior layouts. Designer trains can be found all over Japan. 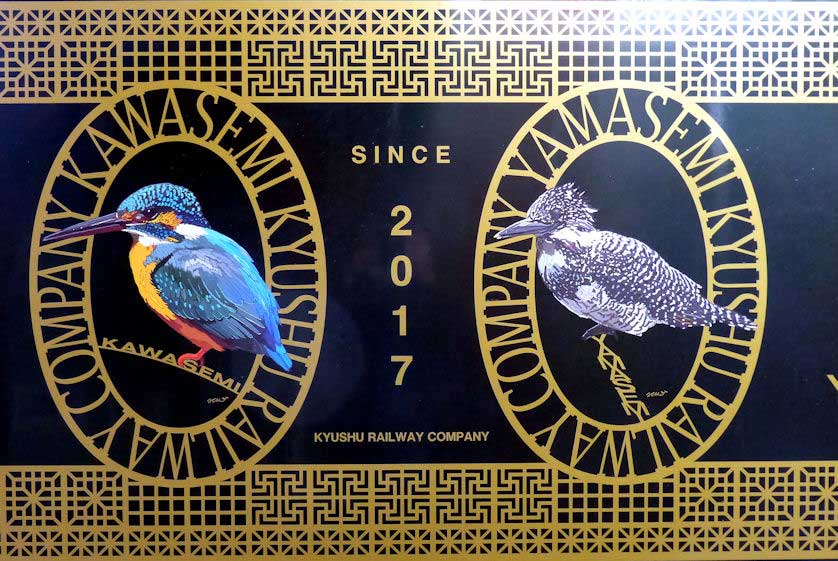 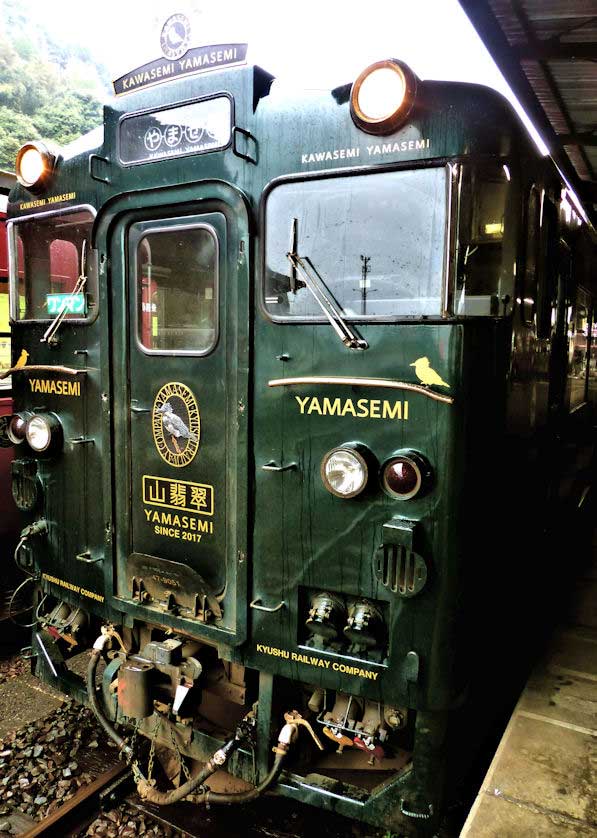 Name of the Train

The name of the train is based on two species of kingfisher, Kawasemi translates as "River Kingfisher" and Yamasemi as "Mountain Kingfisher", though in English their names are Common Kingfisher and Crested Kingfisher respectively.

Images of the birds feature extensively on the exterior and interior of the train.

It is a two-car, diesel train, with the exterior of the Kawasemi carriage being a dark blue, and the Yamasemi dark green.

The unique and stylish interiors feature lots of wood, mostly locally-sourced cypress and Japanese cedar. The ceilings are decorated in a design of foliage.

The interiors were designed by Eiji Mitooka who has produced other special trains for JR Kyushu including the luxurious Seven Stars, the Sonic and Yufuin no Mori.

There are a variety of seating arrangements. Regular reclining seats, semi-compartments with tables, as well as counter seats facing the windows to enjoy the view. 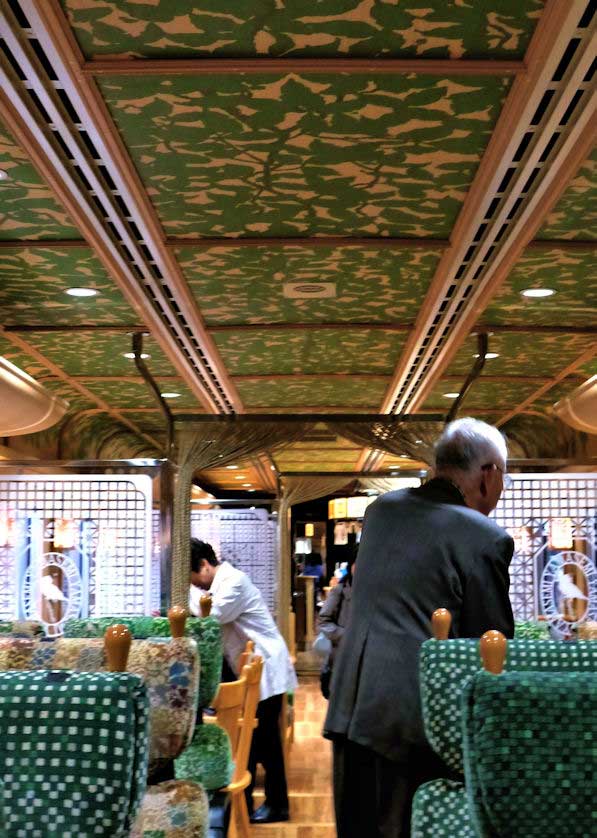 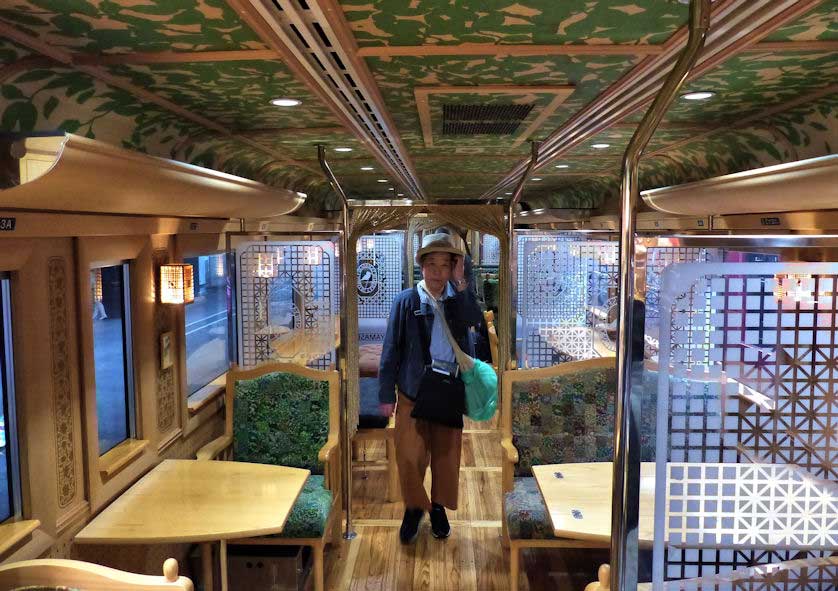 From Kumamoto the train heads south alongside the mountains until it reached Yatsushiro from where it heads up the Kuma River to Hitoyoshi.

Hitoyoshi is a castle town and hot spring resort surrounded by mountains. The Kuma River is one of the three fastest rivers in Japan and the section the train travels along has many sections with white water rapids.

The trains run three times daily all year round.

The journey time is a little over 90 minutes from terminal to terminal, somewhat faster than the Hitoyoshi SL steam train.

The one way fare is only 1,820 yen plus 930 yen for a non-reserved seat or 1,450 yen for a reserved seat. Obviously making a reservation will ensure a seat, though on weekdays out of the main holiday seasons the train is rarely full. 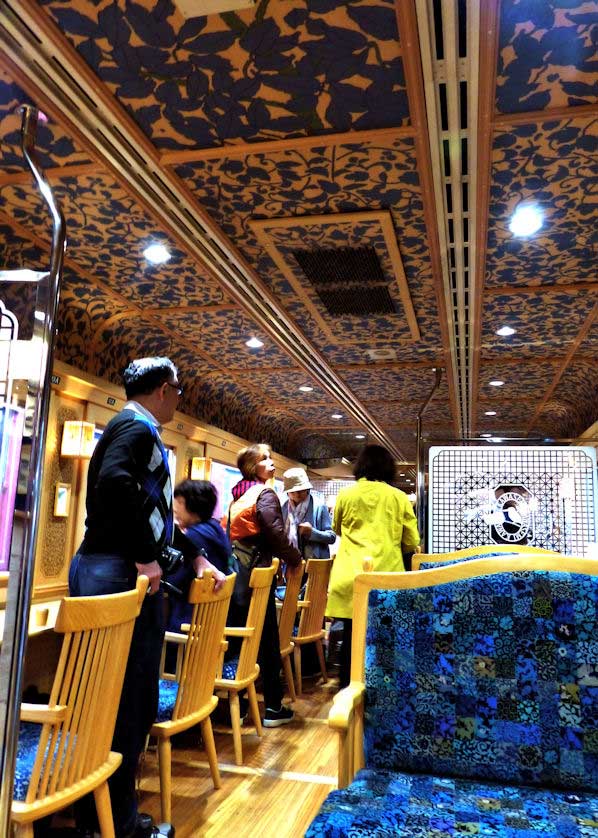 A variety of seating including window facing counters in a Kawasemi car, Kyushu 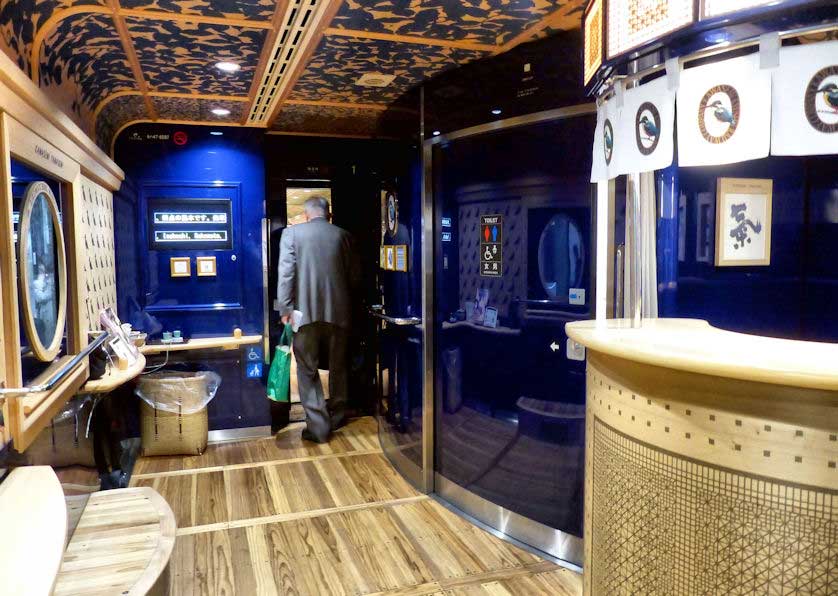 Public area of the Kawasemi car

Hitoyoshi is a favorite destination for train enthusiasts. You could do the return journey to Kumamoto on the steam train Hitoyoshi SL, on the days that it runs, or else you can take another sightseeing train, the Isaburo Shinpei that travels between Hitoyoshi and Yoshimatsu.

The route is considered one of the top three train rides in Japan and has two sets of switchbacks to cross over the mountains and fantastic views of the Kirishima Mountains.

A private railway, the Kumagawa Railway, that operates along the upper section from the Kuma River from Hitoyoshi to Yunomae. A delightful rural line, it also has a special sightseeing train the Den En Symphony Train that also features unique and stylish interiors and special local bento lunch boxes.

Yufuin no Mori from Fukuoka to Yufuin and Beppu