Yoro Railway (Yoro Tetsudo), is a small subsidiary of Kintetsu Railways that operates a single line, just under 60km in length, that connects Kuwana in Mie Prefecture with Ibi in Gifu Prefecture.

The Yoro Railway (Yoro Tetsudo), is a small subsidiary of Kintetsu Railways that operates a single line, just under 60km in length, that connects Kuwana in Mie Prefecture with Ibi in Gifu Prefecture.

At Kuwana the Yoro Line connects with the JR Kansai Main Line and the Kintetsu Nagoya Line to Kintetsu Station in Nagoya. It is great to know that the mascot of Yoro Town, about halfway between Hikone in Shiga and Nagoya City, is Smile Gen-chan, a character from a local legend. He is carrying a gourd, a local speciality

At Ogaki, in Gifu, it connects with the JR Tokaido Main Line, and the Tarumi Railway. From 1944 until 2007 the Yoro Line was completely owned by Kintetsu Railways, who still own the track and rolling stock.

Kaizucchi, the mascot of Kaizu City. Apparently his birthday is March 28th, and his favorite place is Kiso Sansen Park, a popular spot in the city

Kuwana in Mie, one terminal of the Yoro Railway, is home to Yumehama-chan. Yumehama means "dream beach" and on her official blog she lists her interests as dreaming, socializing, staring, and riddles. 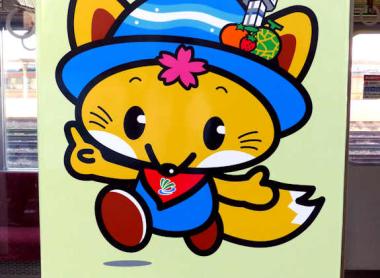 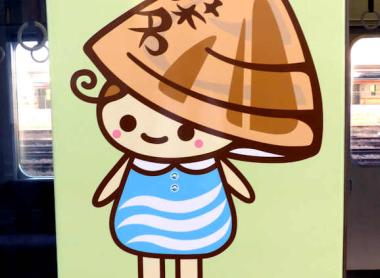 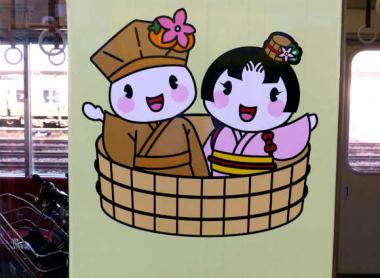 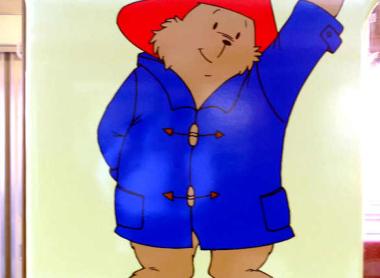 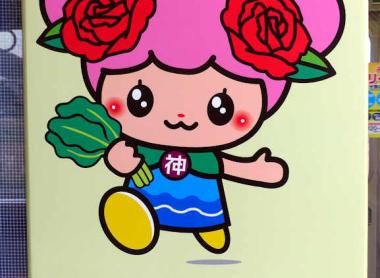 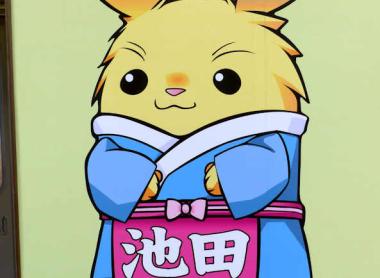 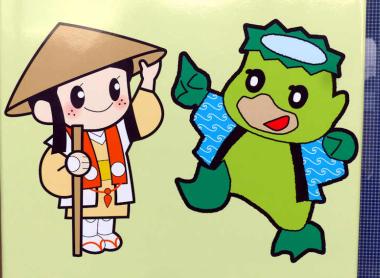 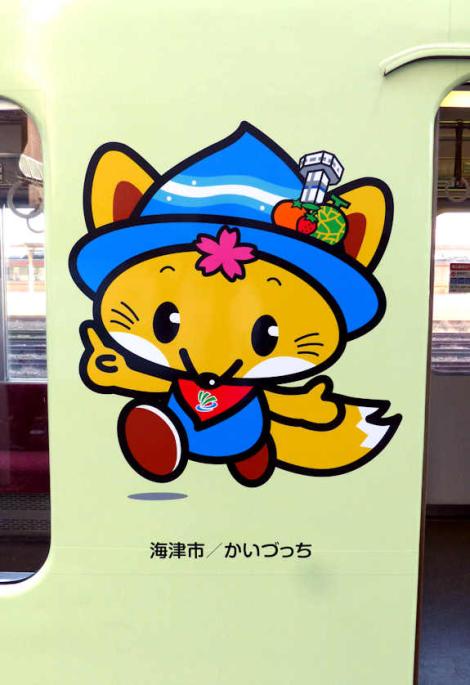 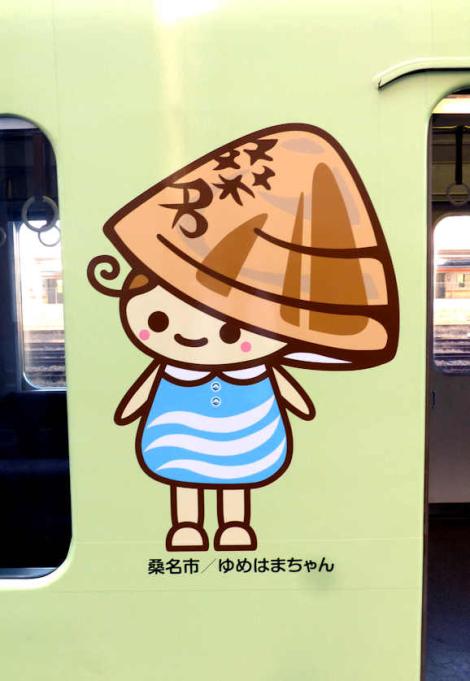 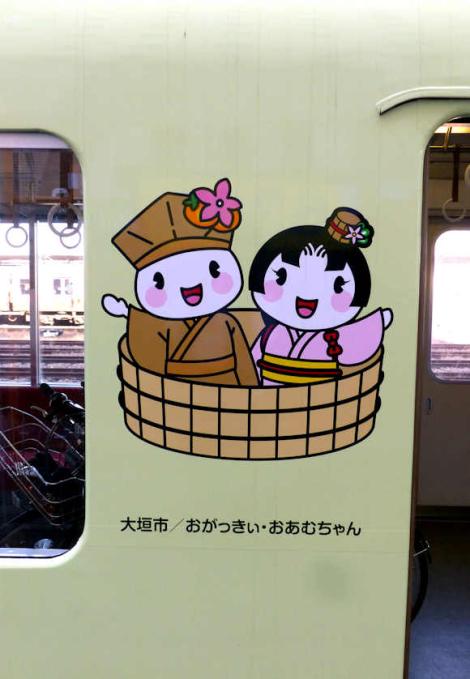 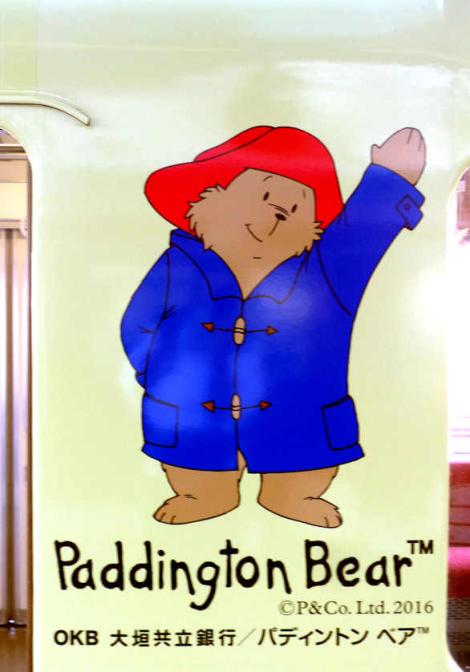 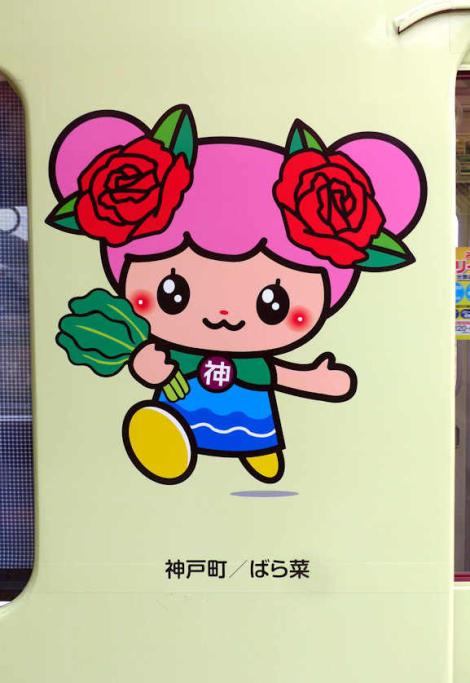 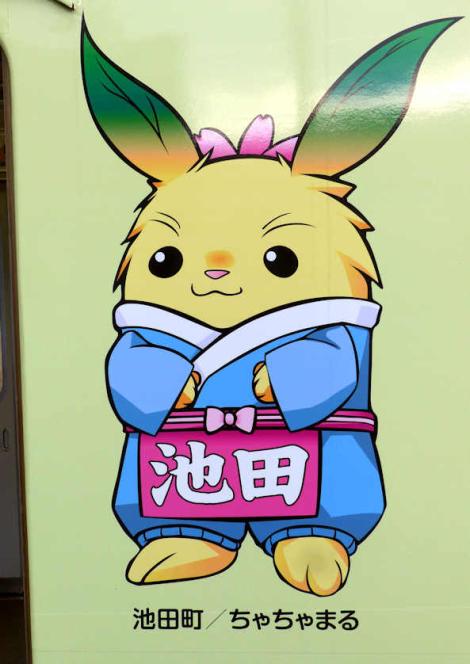 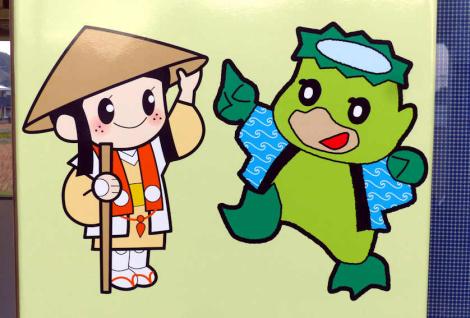 The Yoro Railway was formed as a subsidiary and receives financial help from the municipalities it serves. The OKB train features the mascots of these towns and cities on its exterior livery.

The OKB train was created to mark the tenth anniversary of the "new" railway and was funded by a local bank, OKB.

Ogaki city's mascots are Ogakki and Oamuchan. Ogakki writes haiku poetry and is based loosely on Ogaki's connection to the great poet Basho. Oamuchan is based on a daughter of Ishida Mitsunari, the lord of Ogaki Castle who was on the losing side at the Battle of Sekigahara which took place nearby. Ogakki & Oamuchan are often seen together but it is not known what their relationship is.

The British children's story character Paddington Bear. Not a mascot of any town, it's unclear why it is on the train

Kuwana Station is just 16 minutes by Limited Express from Nagoya Kintetsu Station or 35 minutes by local Kintetsu, and 30 minutes by JR on the Kansai Main Line from Nagoya Station. Local Kintetsu services also take about half an hour to reach Nagoya, though the last Kuwana service is a JR train.

Kuwana is 33 minutes from Tsu by Kintetsu Limited Express and 39 minutes by JR Express from Matsusaka.

Ride the Yoro Line to get to Tado Shrine for its annual horse festival in May and Yoro Park with its Site of Reversible Destiny - a modern art experience created by Nagoya-born, New York-based artist Arakawa Shusaku and his wife and artistic partner, poet Madeline Gins.

Godo town has a rose park and roses are also displayed around the town, so it is not surprising that their mascot features roses. Rose in Japanese is "bara", hence the mascot's name Barana. The "na" refers to the greens she is holding

Ikeda Town is known for growing tea, cha in Japanese, and their mascot, Chachamaru has ears made of tea leaves

Ibigawa Town, the northern terminal of the line is not far from Kegonji, the last temple on the Saigoku Kannon Pilgrimage, one of, if not the oldest pilgrimage in Japan, hence the white-clad pilgrim mascot. Like many areas of Japan, it also has legends and stories of the water sprite known as Kappa