The Tsurumai Line (鶴舞線) is one of the six main subway lines of the Nagoya subway system. It runs east to west from Kami Otai (T01) to Akaike (T20).

The Tsurumai Line is one of the six main subway lines of the Nagoya subway system. 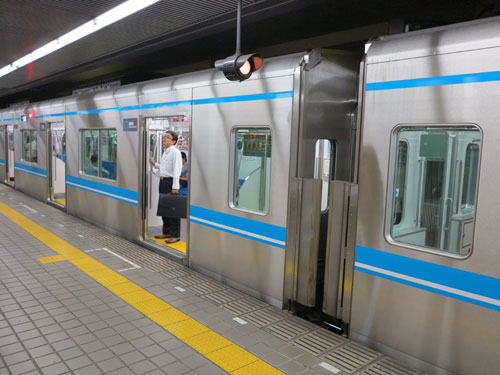 The line, which is marked blue on subway maps, extends 20.4 km east to west from from Kami Otai (T01) in the north west of the city to Akaike (T20) in the east. The east - west line is a real work horse of the Nagoya metro as it funnels commuters and shoppers in to central Nagoya from the large dormitory towns of Inuyama to the north and Toyota to the east. 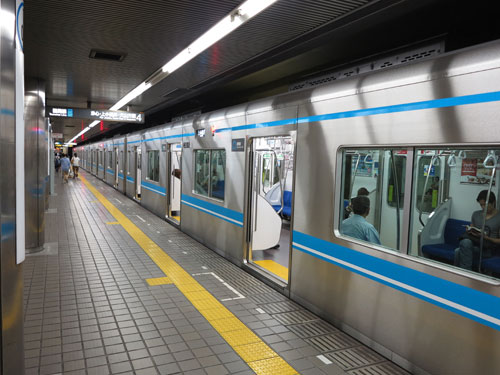 The line always seems to be packed, especially the last train to Toyota which usually holds a tribe of red-faced salarymen "fresh" from their evening's libations. The Tsurumai Line continues from Akaike in the east of Nagoya as the Meitetsu Toyota Line to Toyota city. From Kami Otai it continues as the Meitetsu Inuyama Line to Inuyama to the north.

Parts of the line first opened in 1977. The main interchange stations on the Tsurumai Line are Fushimi (for Nagoya Station), Marunouchi, Kamimaezu (for Sakae), Tsurumai (for JR Line connections to Chikusa, Ozone, Ena and Nakatsugawa on the Chuo Line), Gokiso (for the Marunouchi Line), and Yagoto (for the Meijo Line).

The main places to stay in Nagoya are in and around JR Nagoya Station and in nearby Fushimi and Sakae. The area around Kanayama Station on the JR, Meitetsu and subway lines also has a cluster of hotels. Some recommended places to stay in Nagoya include the Hilton Hotel in Fushimi, the upmarket Nagoya Kanko Hotel and the Hotel Mielparque near Chikusa Station. Read more about this subway line.