The Chichibu Railway is a scenic railway that runs from Mitsumineguchi Station to Hanyu taking in many famous sights of Saitama Prefecture.

The Chichibu Railway is a private railway line that runs from Mitsumineguchi Station in the mountains of far western Saitama Prefecture to Hanyu in central northern Saitama, covering a distance of 71.7 kilometers in total. 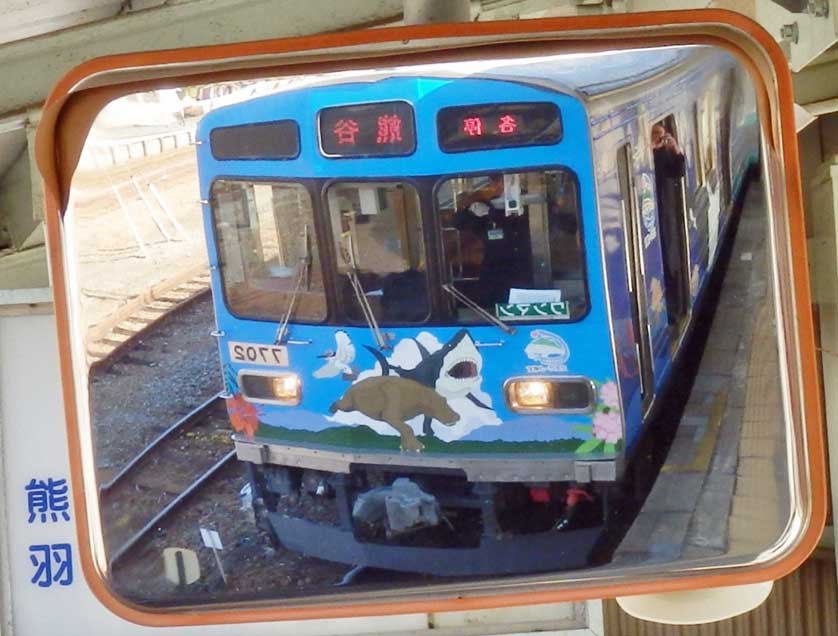 On its route, the Chichibu Railway cuts through much scenic mountainous landscape. That scenery as well as the small, vintage wooden train stations give the line a very nostalgic flair.

On weekends, national holidays and certain weekdays during peak seasons, the Chichibu Railway operates a steam train once a day, the Paleo Express.

According to the Chichibu Railway website, that's the closest steam train to Tokyo. Unlike boarding a steam train in a railway museum, here you can have the experience of riding the real thing, stopping at real stations and actually covering some distance. 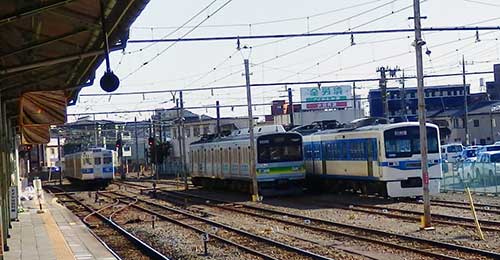 Connecting to the Chichibu Railway

In Kumagaya, northern Saitama, the Chichibu Line connects to the Joetsu and Hokuriku Shinkansen lines as well as the JR Takasaki Line, starting out in Tokyo from Ueno Station.

In Yorii, the Chichibu Railway connects to the Tobu Tojo Line, starting out of Ikebukuro Station. 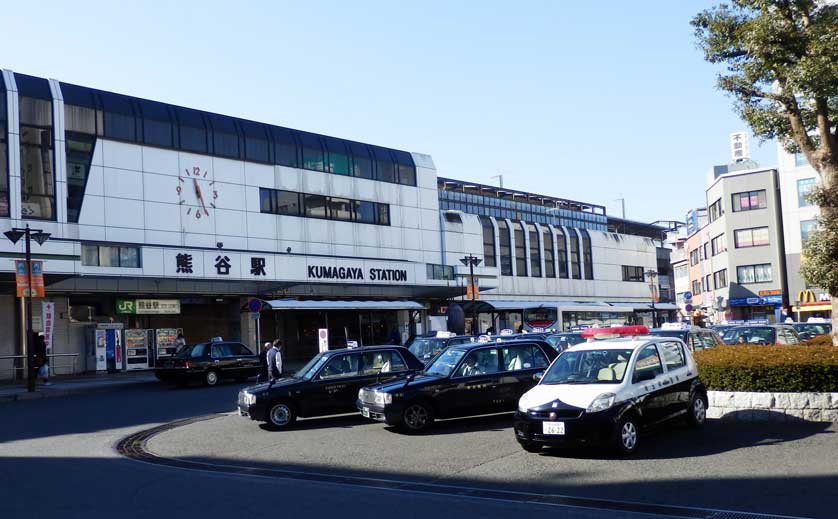 Kumagaya Station, here the Chichibu Railway intersects with the Shinkansen 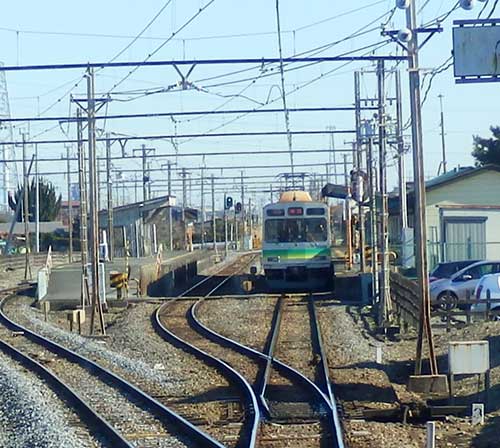 Chichibu Railway through the driver's window

Shortly after Hanno Station, the Seibu Chichibu Line enters the Koma River Valley. That's a very scenic ride already, offering a good number of stops on the way that give access to sites worth visiting. From Koma Station, for example, you can easily walk to the Kinchakuda, in late September Japan's biggest higanbana field, or hike up nearby Mount Hiwada which offers great views towards Tokyo's skyscrapers.

Ashigakubo Station on the same line offers access to an artificial ice-covered forest, the Ashigakubo Tsurara, in winter and access to a great number of mountain hiking paths in all hiking seasons.

Yokoze Station finally is the access stop for people who want to hike up Mount Buko, the signature mountain of the Chichibu area. 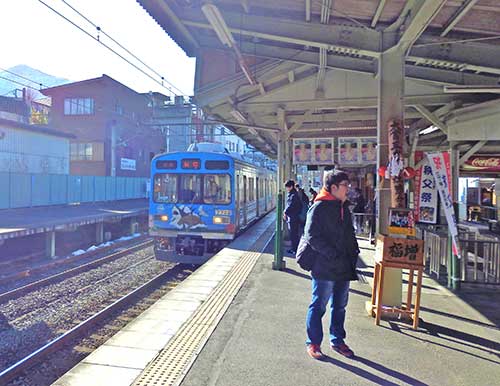 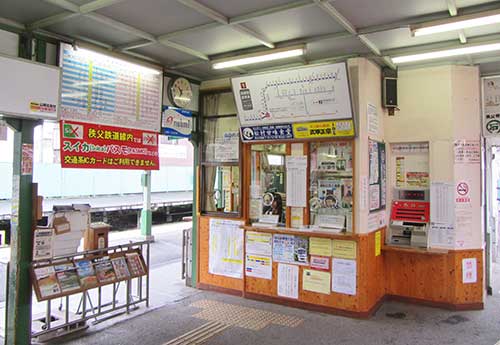 Both the Seibu Chichibu Line and the Red Arrow Express terminate at Seibu Chichibu Station. Chichibu City itself, an old industrial town turned into a rustic tourist spot, offers many sights including Chichibu Shrine and the Meisenkan silk factory museum. 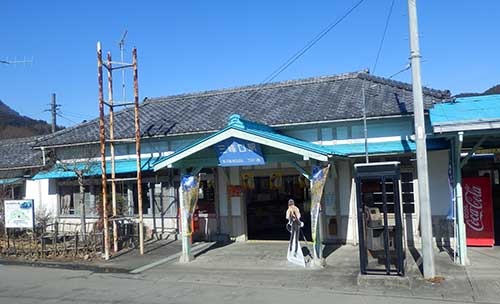 From Seibu Chichibu Station it is about a 5 minute walk to Ohanabatake Station, the connecting Chichibu Railway Station.

Like most of the Chichibu Railway stations, Ohanabatake Station is decidedly vintage. A wooden construction erected in 1917, it's an authentic reminder of how Japanese rail travel stations looked like in the days of the steam trains.

From Ohanabatake, you have two options: to go towards Mitsumineguchi in the west or towards Nagatoro, Kumagaya and Hanyu in the northeast.

Traveling towards Hanyu, you soon get to the remnants of the ancient copper mines of Wadokuroya. A large Wado Kaichin coin replica on the Wadokuroya station platform points out the history of the area. The Wado Kaichin were Japan's first coins, minted here in the early 8th century and used to finance the construction of the then new capital of Japan, Nara. 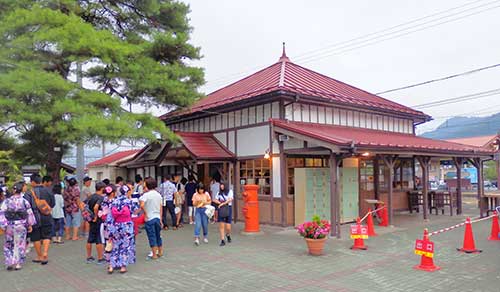 Nagatoro is not far behind, an especially scenic town, famous for its Funadama River Festival in mid-August, featuring brightly lit riverboats and a giant fireworks. The festival takes place at the Iwadatami, a rock platform adjacent to the Arakawa Gorge, a sight worth visiting all year. At the Iwadatami, riverboat cruises are also available.

Nagatoro is also the access point for Mount Hodo, famous for its views over to the Gunma mountains and for its plum and robai gardens, blossoming in mid-winter.

From Nagatoro, the train continues to Yorii, famous for its River Museum. Eventually, the train arrives at Kumagaya where it connects to the Joetsu and Hokuriku Shinkansen as well as the Takasaki Line.

Kumagaya, an old Nakasendo road station town, is today mostly a mix of industrial and residential areas on the northern periphery of the Tokyo Metropolitan Area. The town's most famous site is the Menuma Shodenzan Temple, a temple rivalling with its elaborate and colorful wood carvings the best in Nikko. In the cherry blossom season from late March to early April, Kumagaya's Arakawa River Park offers great views over to the still snow-covered Mount Asama in neighboring Gunma Prefecture, framed by the blossoming trees along the river walk. 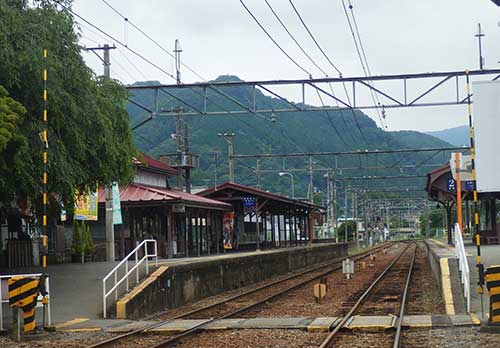 History of the Chichibu Railway

The Chichibu Railway started operations between Kumagaya and Yorii in 1901, it took up to 1930 until the whole current route Mitsumineguchi to Hanyu was finished. 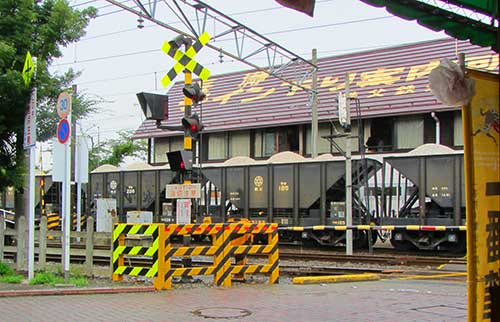 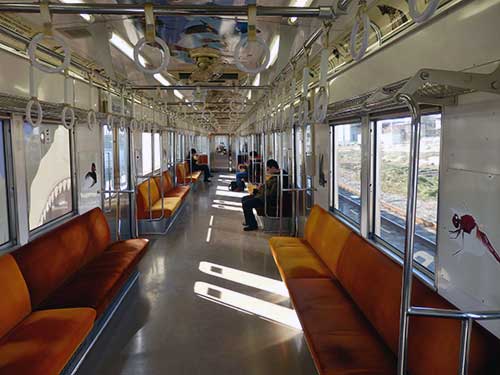 Chichibu Railway keeps its traditions alive by running a steam train on its line, the Paleo Express.

The Paleo express runs only on weekends, public holidays and certain weekdays in peak vacation season. The Japanese-language website of the Chichibu Railway features a calendar marking each day the train will run. Days marked green are weekdays with the train in operation, pink days are weekends and holidays, orange days indicate special events.

Tickets must be bought or booked in advance. Reserved seat tickets can be purchased at JR East ticket offices.

Numbered tickets for non-reserved seats can be booked by telephone at 048-523-3317 (in Japanese) or online www.chichibu-railway.co.jp/slreservation (in Japanese)

However, non-reserved seats mean that a seat is not guaranteed.

The Chichibu Railway does not accept SUICA or PASMO cards. 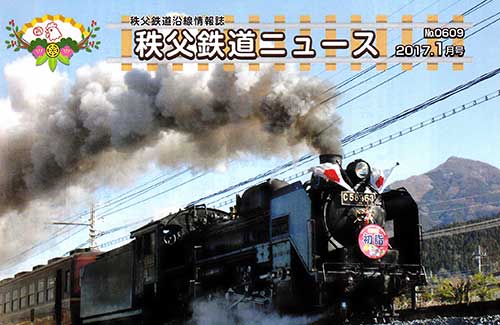