The Higashiyama Line in Nagoya is one of the six main subway lines of the Nagoya subway system.

The Higashiyama Line, which is marked yellow on subway maps, extends 20.6 km east to west from from Takabata (H01) in the south west of the city to Fujigaoka (H22) in Meito-ku in the north east where it connects with the Linimo, which runs 8 stops to Yakusa.

The Higashiyama Line (aka Nagoya City Rapid Railway Line 1) is the busiest line on the Nagoya subway network and connects Nagoya Station with the commercial and entertainment district of Sakae and runs through the traditional heart of historic Nagoya including the prosperous areas of Ikeshita, Kakuozan, Motoyama and Higashiyama Koen.

There are women-only carriages all day on weekdays. 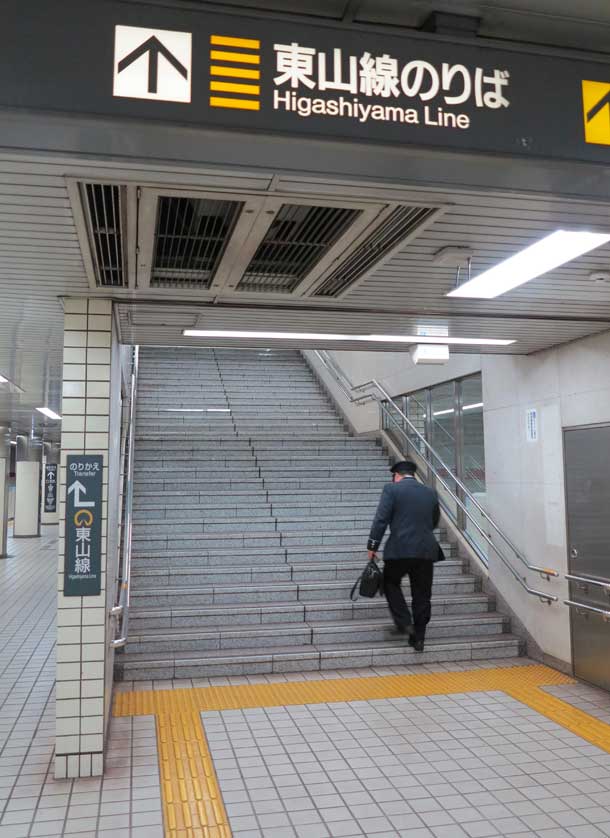 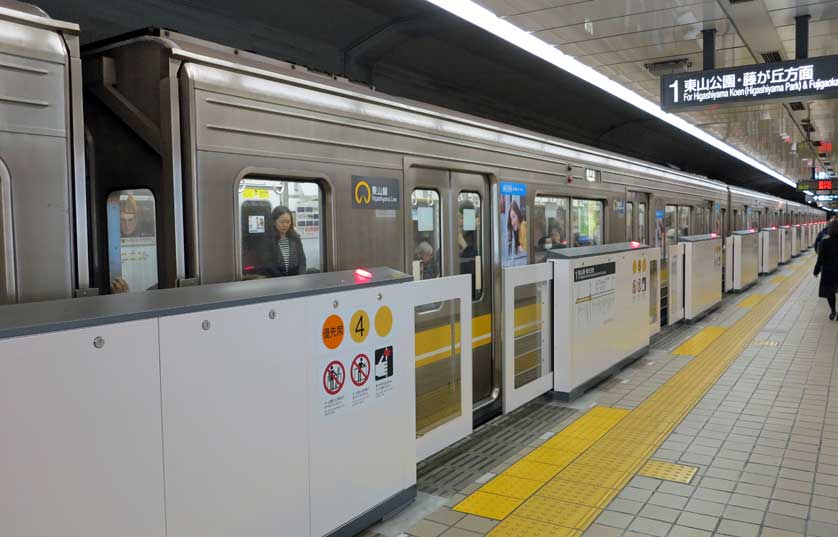 Kami Otai is the western terminus of the Higashiyama Line. It is west of Arako Park and Arako Kannon Temple.

Hatta Station connects with the JR Central Kansai Line for Yokkaichi and Matsusaka in Mie Prefecture. The adjacent Kintetsu-Hatta Station is on the Kintetsu Nagoya Line from Nagoya Station to Yokkaichi, Namba Station in Osaka and Kashikojima.

From Hatta the Higashiyama Line heads directly north to the suburban station of Iwatsuka.

Honjin Station is close to the small Nagoya mosque. There are a number of halal restaurants and stores in the area.

Kamejima Station is close to Noritake Garden with its displays of Noritake ceramics and restaurant and from there the excellent Toyota Commemorative Museum of Industry & Technology is also walkable. 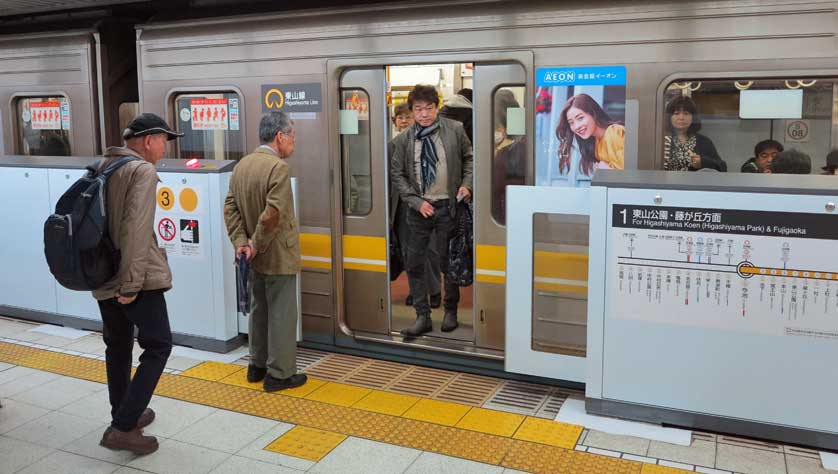 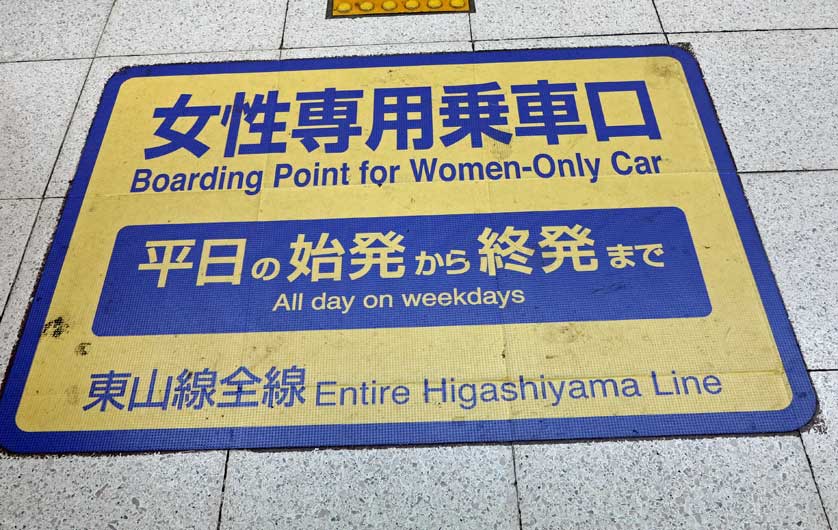 From Kintetsu Nagoya Station there are Kintetsu trains to Osaka Namba Station, Tsuruhashi and Uehommachi in the Kansai, Kintetsu Nara Station in Nara (with changes as Yamato-Yagi and Yamato-Saidaiji stations), Tenri and Kyoto as well as Kuwana, Yokkaichi and further south Toba and Kashikojima in the Ise Shima region of Mie Prefecture.

Sakae is the fun, commercial and shopping center of Nagoya. To the north is Hisayaodori Station on the Sakura-dori Line. Attractions in the area include the Nagoya TV Tower and Oasis 21. Oasis 21 contains the Sakae Bus Terminal with extensive local and highway buses. The Aichi Prefectural Museum is also adjacent. From Meitetsu Sakae-machi Station trains run out to the pottery town of Seto to the east of Nagoya on the Meitetsu Seto Line. A night bus from Sakae basically follows the Higashiyama Line to its eastern terminus at Fujigaoka leaving Sakae at 12.45am and 1.30am on weekdays and stopping at all the stations along the line.

Shin-sakaemachi to the east has a "streetier" feel than Sakae with a mix of lower rent music clubs, izakaya, love hotels and a red-light district. Nunoike Catholic Church is a short walk to the north east.

Imaike Station is also on the Sakura-dori Line of the Nagoya subway. Imaike is a lively entertainment area with a number of bars, cafes, music clubs, pachinko parlors plus a small red-light area. The large Chikusa Post Office is right at the station. 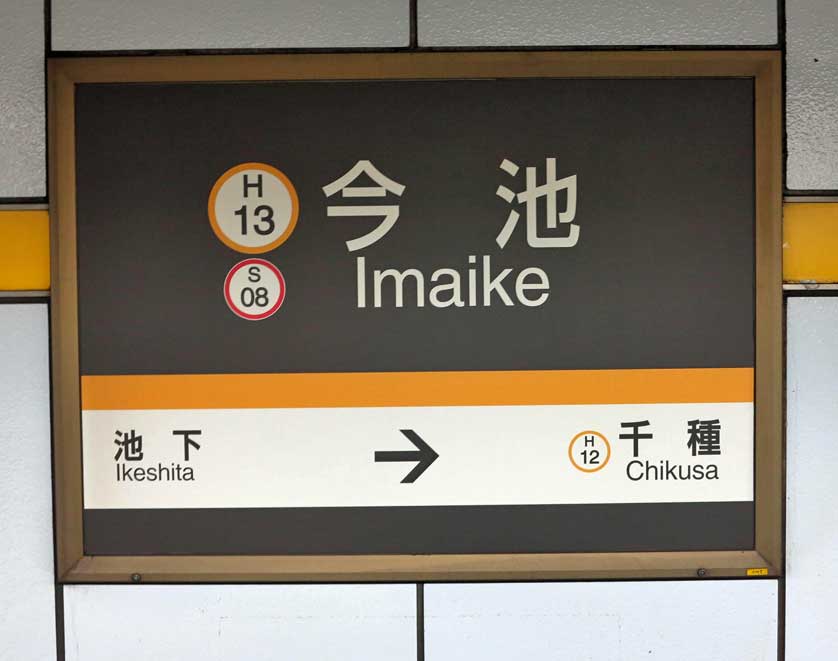 The Higashiyama Line heads west along Hirokoji Dori to the slightly more salubrious neighborhood of Ikeshita.

The area around Kakuozan has a more up-market feel and the neighborhood has a regular flea market and a summer festival on the road leading up to Nittaiji Temple and Yoki-so Villa. 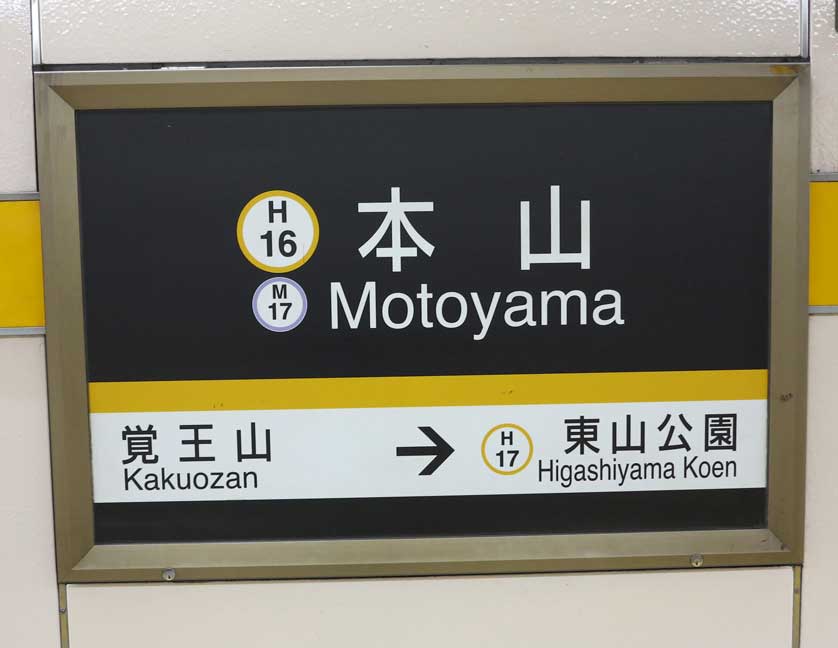 Motoyama is one of Nagoya's most affluent areas close to some historic temples, shrines and parks. Within easy reach of Motoyama are Heiwa Koen, Nagoya University, Higashiyama Park, Toganji Temple, Shiroyama Hakusan Shrine (formerly Suemori Castle) and a number of other small shrines and temples. Among the specialist shops, bars and restaurants, Cafe Lembeek serves delicious Belgian beer and gourmet food.

Hoshigaoka Station is south of the extensive Heiwa Park.

Kamiyashiro Station is located in a suburban area not far from the large Idaka Ryokuchi Park.

The environs of Hongo Station are suburban.

Fujigaoka Station connects with the Linimo. The area around the station includes Effe Department store with a branch of the Seijo Ishii imported goods supermarket, a Matsuzakaya store, a McDonald's, Starbucks and assorted convenience stores. Buses from Fujigaoka Station run to Chubu International Airport with the first bus at 5.30am and the last bus to Centrair at 6.20pm. Journey time to the airport is approximately 55 minutes and the cost is 1400 yen. There are also bus services to the Toyota Automobile Museum (TAM), Seto Eki and Hishino Danchi. 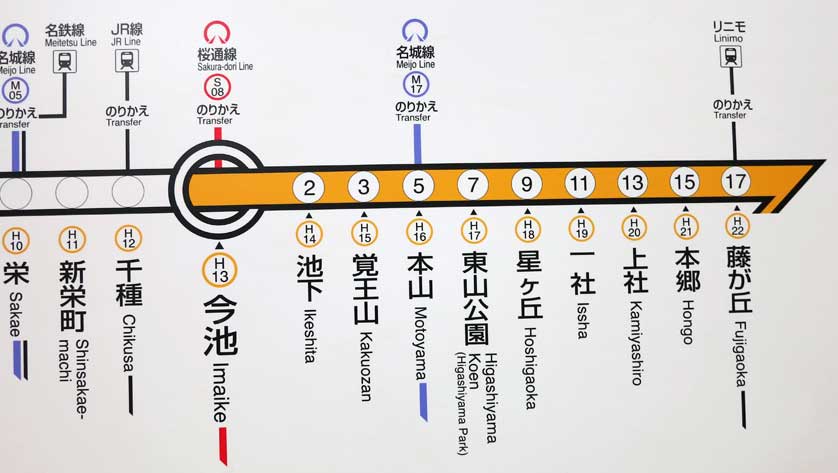 The Higashiyama Line is the busiest of the six subway lines in Nagoya and runs west to east from Takabata to Fujigaoka, where it connects with the Linimo.