Ride the slow train of the Hisatsu Line, a local railway line in Kyushu which wonderful views of the Kirishima Mountains.

By all accounts Japan has an excellent rail network. The high speed shinkansen network is renowned for its punctuality and efficiency, with shinkansen trains reaching speeds in excess of 250 km/h as it whisks you from A to B.

Receiving much less attention however, is the nationwide network of local lines that, while their number has decreased since their heyday in the early twentieth century, still meander their way into most parts of the four main islands.

Of course there are basically two types of traveling: for those for whom "time is money" getting to your destination as fast as possible is the best, though it is going to cost more, but for those for whom the journey is more important, then Japan' local trains have a lot to offer at a lower cost, if you have the time. 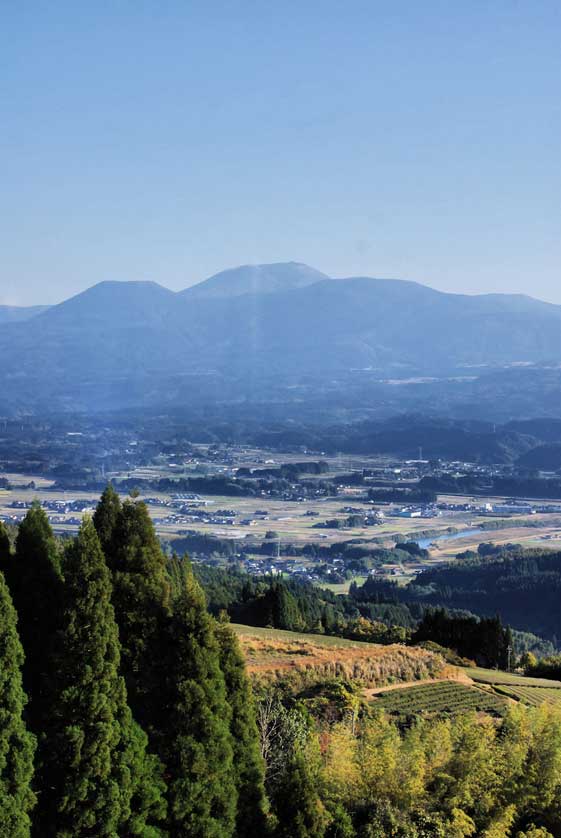 Kirishima Mountains in the distance from the Hisatsu Line 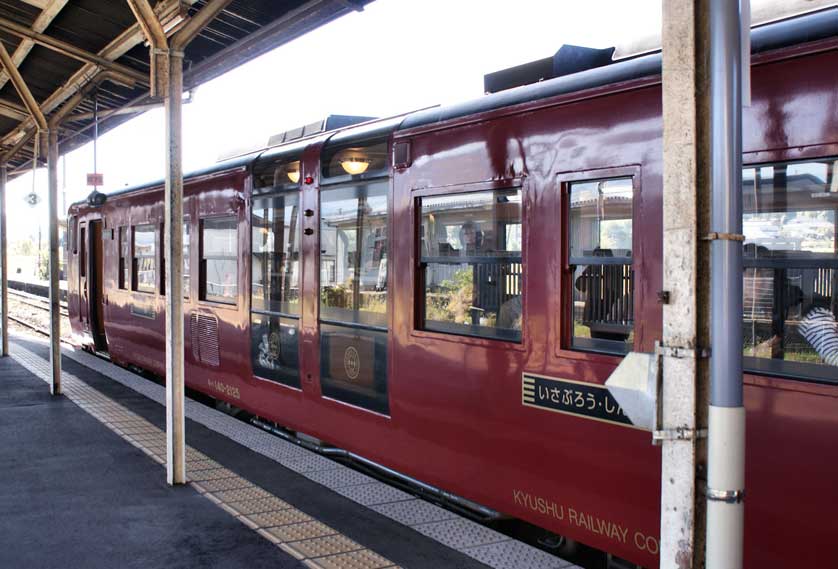 A good example of the latter would be the Hisatsu Line in southern Kyushu. Running from Yatsushiro on the coast in the south of Kumamoto Prefecture, the line runs inland to Hitoyoshi Station in Hitoyoshi before crossing a mountain range and ending in Kirishima where lines connect to Miyazaki or Kagoshima.

Construction began at either end in 1903 and was completed in 1910. The most logical route would have been along the coast, but Japan had just recently fought two major wars against China & Russia, so defense was a consideration, and so the route through the mountains was chosen. The first section from Yatsushiro to Hitoyoshi follows the Kumagawa River which is classed as one of the three fastest rivers in Japan. During the second half of the journey up the valley many rapids can be seen from the train and you will probably catch glimpses of boats and rafts shooting the rapids.

For a really unique journey you could take the SL Hitoyoshi, a steam train that runs from Kumamoto to Hitoyoshi and back. It only runs a few times a week for half the year, and is very, very popular so seats need to be reserved well in advance. At Hitoyoshi, a hot spring resort, you need to change trains. From here the Kumagawa private railroad carries on up along the river as far as the onsen town of Yunomae, but the Hisatsu Line heads over the mountains towards Yoshimatsu. The trains are called Isaburo & Shinpei, named after two government ministers from the Meiji Period, the Isaburo runs from Hitoyoshi to Yoshimatsu, and the Shinpei does the return journey. 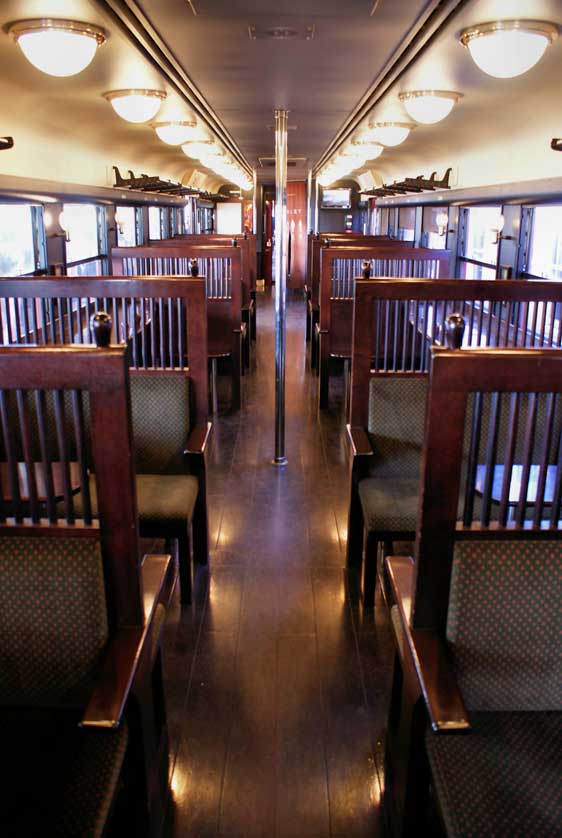 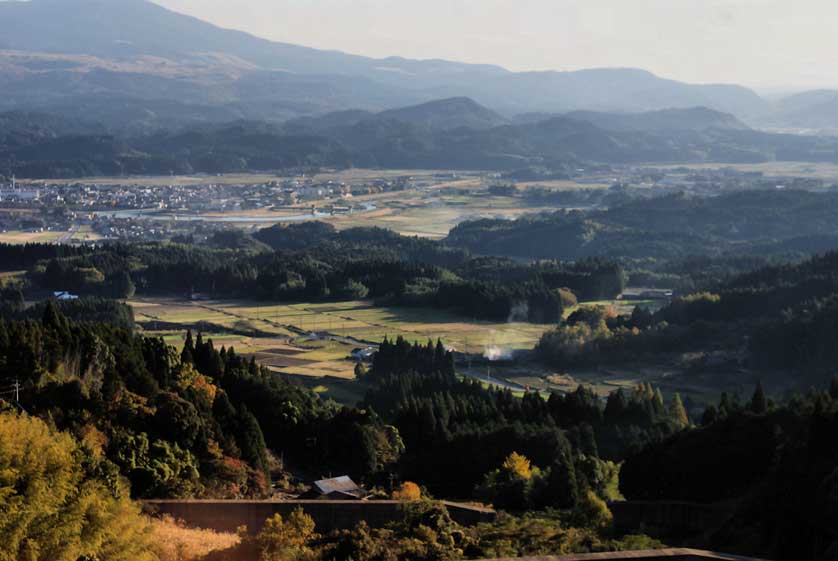 Looking down on Kyomachi Onsen

This section of the line is known as one of the three best views from a train in Japan. The trains themselves are standard diesel commuter trains but they have been refitted. The interiors are done out in  polished wood, and there are a couple of nice touches like noren curtains hanging on the toilet door and a wastebasket made of wickerwork, but the best renovation is the floor to ceiling windows to allow better views of the scenery to come.

Looking down on Okoba Station

The train climbs slowly out of Hitoyoshi into the mountains to the south. At the first station, Okoba, the trains stops for 5 to 10 minutes and most passengers alight. It's an old wooden station, no longer manned, but at some point a tradition began of people leaving their meishi, name cards, and now the waiting room walls are now completely covered in them and they also spread out onto the outer walls. The first photo opportunity of the ride.

At Okoba the driver changes to the other end of the train for here is the first switchback of the trip. Its a double switchback, so after leaving the station the train stops again to reverse. It then follows a 360 degree loop that climbs higher. At one point you can look down on the station you have just left and views down over Hitoyoshi and the Kumagawa valley and mountains beyond can be had. 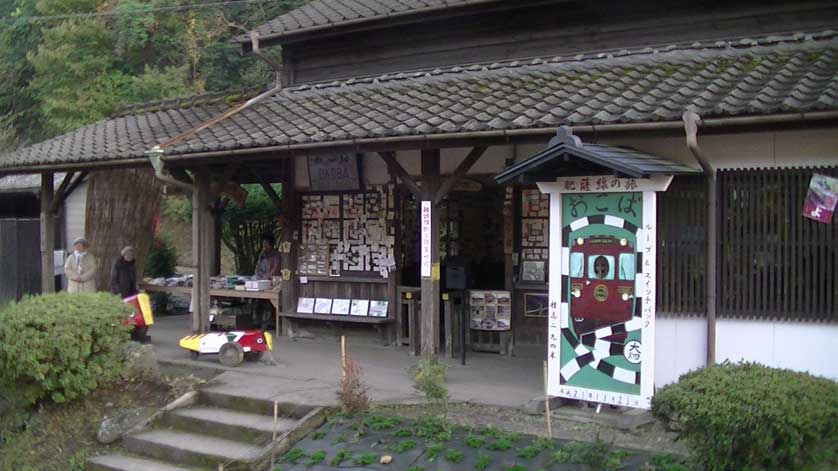 The train climbs slowly passing through several small tunnels and accompanied by an almost continuous commentary from the on-board guide. The next stop is Yatake at 550 meters above sea level, another old, wooden, unmanned station. The train stops here and most people alight for the photo opportunity. In a big shed is one of the old steam engines that used to run this route. After Yatake the train then runs through a 2 kilometer long tunnel before emerging on the other side of the mountains to stunning views to the south over Ebino and the Kirishima Mountains.

Several times the train will stop to give passengers plenty of opportunities to take photos before pulling in at Masaki Station. Here you will be greeted by local people who have set up stalls in the station selling local souvenirs and snacks and drinks. At Masaki the train reverses twice down the next switchback before gently descending to Yoshimatsu. Here you need to change trains again. You could hop on a local train on the Kitto Line which heads across the mountains to Miyakonojo and on to Miyazaki, but most people opt for the Hayato no Kaze, another sightseeing train which heads to Kirishima and on to Kagoshima. 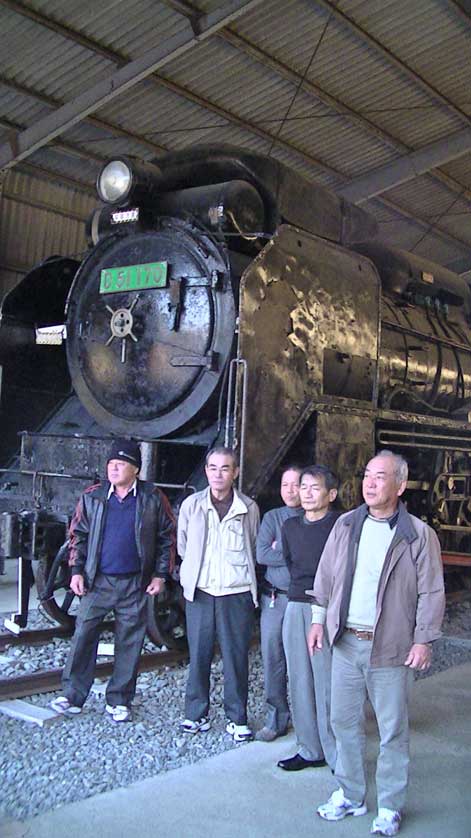 Like the Isaburo & Shinpei, the Hayato no Kaze is a standard commuter diesel train that has been refitted with wooden interiors, large windows, on-board guides, and an observation car. It passes by the Kirishima Mountains before heading down to Kagoshima Bay and its views of volcanic Sakurajima.

From Kumamoto to Kagoshima following this scenic route will take you about 7 hours, a good portion of which will have you looking out the windows at the view and cost a little over 4,000 yen, or you could jump on a Kyushu Shinkansen and do the journey in just over an hour and enjoy the view of your fellow passengers working on their lap tops or sleeping, and pay twice the price.

For further information on where to buy tickets or on chartering a train visit www.hs-orange.com. 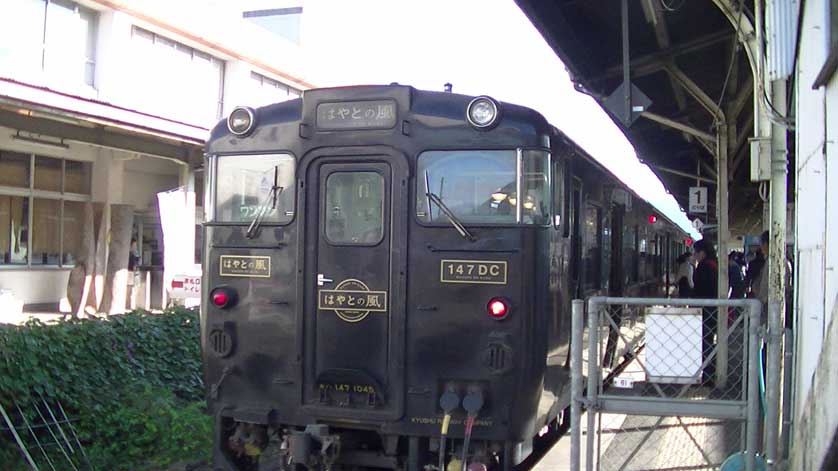