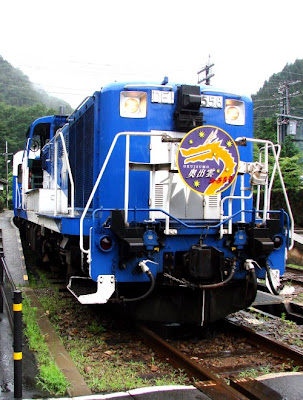 Train For getting from A to B quickly and conveniently, Japan's Shinkansen and Express rail networks are second to none, albeit at a hefty price, but for those who actually enjoy traveling, for those who feel that the journey is at least as important as the destination, Japan's rural rail lines have much to offer. The trains travel at slow speed, allowing you the pleasure of taking in some wonderful scenery, and your fellow passengers are more likely to engage in conversation with you than on the commuter trains. The intimacy extends even further, as the trains literally pass through people's back yards, again affording glimpses of life quite different to that of the cities. 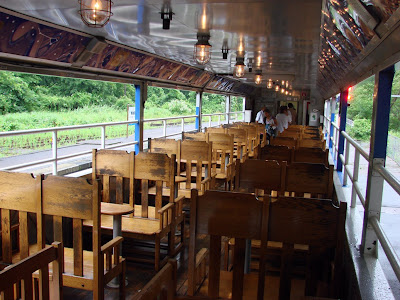 Kisuki Line carriage Most of the rural lines are single track, and usually single carriage trains, and the downside is that they don't run very often, but with some judicious planning it's possible to spend days, or weeks, leisurely criss-crossing a less visited Japan in comfort. One such line is the JR Kisuki Line. Starting at JR Shinji (San-in Line), on the shore of Lake Shinji (Japan's 8th largest lake), in Shimane, the train travels 82 kilometers to terminate at Bingo-Ochiai station high in the mountains of Hiroshima, near where the 3 prefectures of Hiroshima, Shimane, and Tottori meet. For most of the way the line follows the Hi River, passing through the area known as Okuizumo (Inner Izumo) an area that is the setting for one of Japan's oldest myths, the story of Susano defeating the 8-headed serpent, Yamata no Orochi, and thereby winning the hand of a local "princess". There are numerous sites in the area connected with the myth and its characters, as well as a couple of folklore museums, and museums on sword-making and iron-forging, as the Yamata no Orochi myth is linked to the discovery of iron in this area in ancient times. 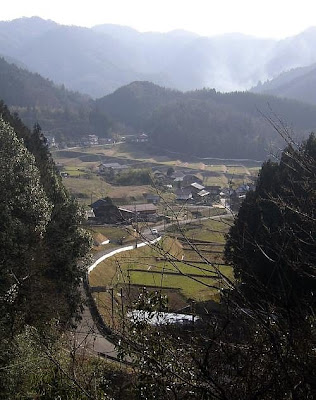 Views from the train There are plenty of onsens in the area, with Kisuki and Izumo Yokota having many. Kisuki is also known for its dairy products and its cherry blossoms along the riverbank. When the train reaches Izumo Sakana, at 564 meters, it stops for 15 minutes to let the passengers alight and sample the healing waters of a sacred spring in the station. The waters are famous in this part of the world, with one restauranteur driving more than an hour each way to fill his car with barrels of the water for use in his restaurant. 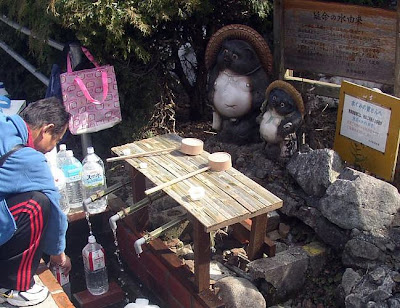 Izumo Sakana spring The mountains around Izumo Sakane are very steep, so to get up them the train now shunts up a series of switchbacks, one of only 3 in all of Japan. After the 3rd switchback the train pauses to allow the passengers to literally look directly down at the station 150 metres below. The train continues to ascend along a wide curve until Miinohara station, at 726 meters the highest station in the JR West network, until finally reaching Bingo-Ochiai. Once a busy rail junction, with turntable, engine sheds, water tower, and engineers and staff living around the station, it is now deserted and unmanned. This type of station is known as a Hikyou station, a "secluded" station, and is very popular with Japanese train enthusiasts, of which there are many. The journey takes 2 hours and 45 minutes, and a single ticket is 1,450 yen From here you can take a Geibi Line train either to Miyoshi, then on the Hiroshima City, or to Niimi in Okayama Prefecture. The Okuizumo Orochigo is a special tourist train that runs on this line, with open windows and wooden tables and benches that runs daily from April to June, and on weekends and holidays from July to November.