The Sakura-dori Line is a subway line in Nagoya that runs from Nakamura Kuyakusho via Nagoya Station to Tokushige in the south western suburbs. 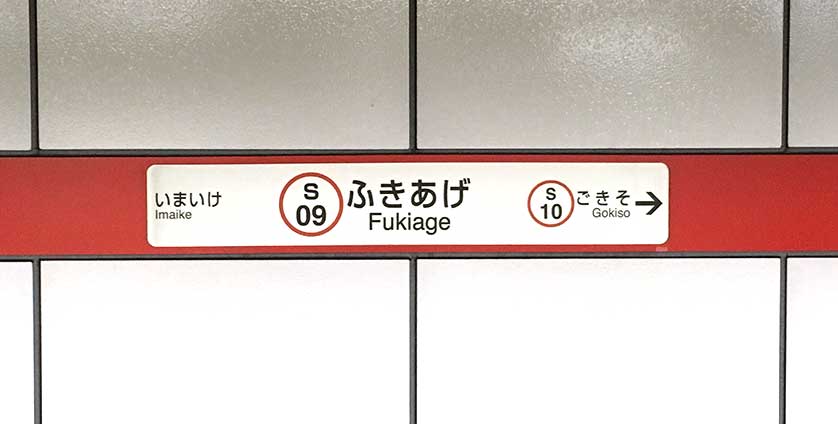 The Sakura-dori Line in Nagoya is one of the six main subway lines of the Nagoya subway system.

The journey time from Nagoya Station to Tokushige Station is 35 minutes. 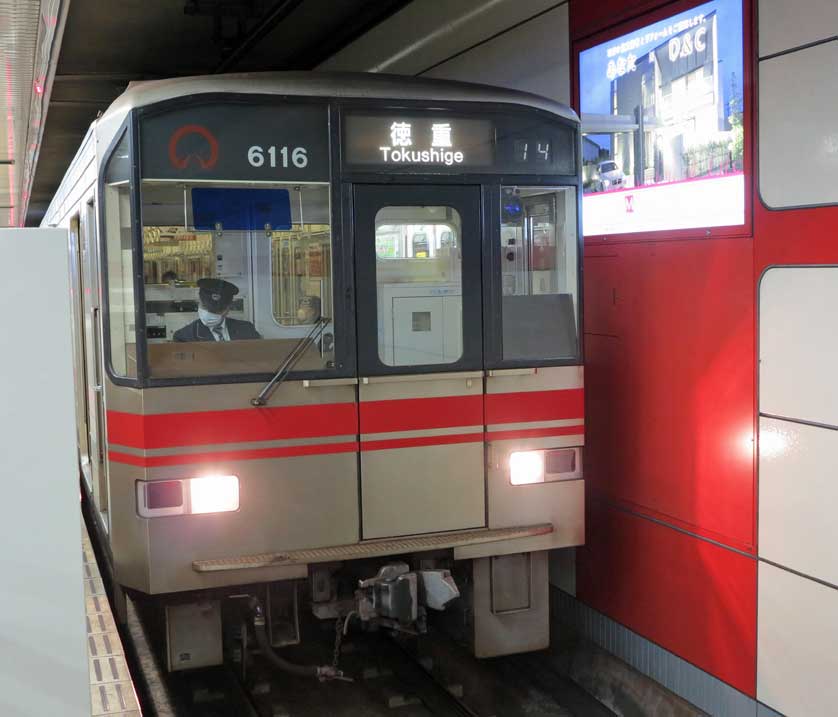 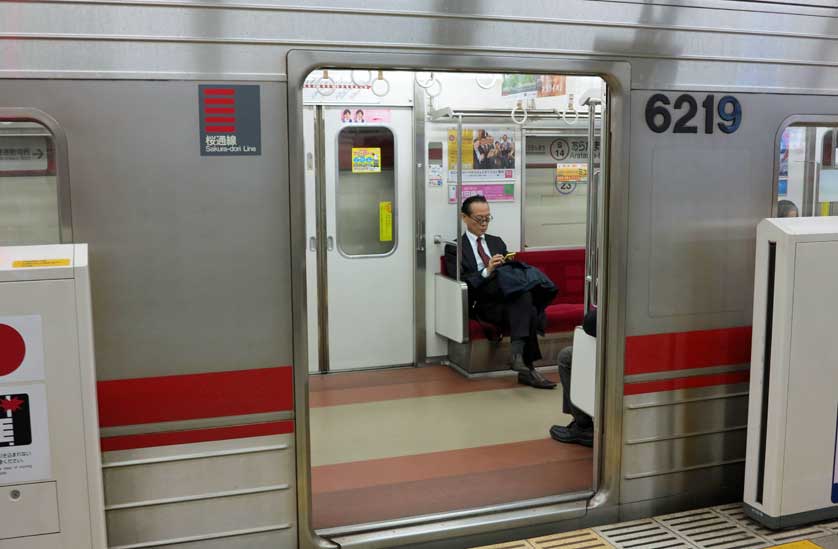 Nakamura Kuyakusho is located west of Nagoya Station close to a number of hotels, restaurants and entertainments on this more low-rise side of Meieki.

The Higashiyamai Line also intersects at Nagoya Station along with the Aonami Line south to Nagoya Messe, Legoland Japan and the SCMaglev & Railway Park at Kinjo-Futo Station.

From Kintetsu Nagoya Station there are Kintetsu trains to Osaka Namba Station, Tsuruhashi and Uehommachi in the Kansai, Kintetsu Nara Station in Nara (with changes as Yamato-Yagi and Yamato-Saidaiji stations), Tenri and Kyoto as well as Kuwana, Yokkaichi and further south Toba and Kashikojima in the Ise Shima region of Mie Prefecture.

Kokusai Center (International Center) Station is connected to Nagoya Station by the Uni Mall underground shopping arcade. At Exit 2 is the Kokusai Center conference center. Within the building are US Consulate in Nagoya and the Nagoya International Center (NIC) providing free information (on culture, tourism, and living in Japan) and legal consultation services for foreign residents in Nagoya. There is also a library with books and other publications in a variety of languages.

Marunouchi is part of Nagoya's business district in the Meieki district of town close to Nagoya Station. There are numerous hotels in Marunouchi and the Nagoya Convention & Visitors Bureau is located close to the station. Marunouchi Station is an interchange station with the Tsurumai Line.

Hisayaodori Station is on the northern edge of Nagoya's main shopping and entertainment area of Sakae. Hisayaodori is convenient for the Nagoya TV Tower and Oasis 21. From Meitetsu Sakae-machi Station trains run out to the pottery town of Seto to the east of Nagoya on the Meitetsu Seto Line. Oasis 21 contains the Sakae Bus Terminal with extensive local and highway buses. The Aichi Prefectural Museum is also adjacent. Sakae Station on the Higashiyama and Meijo lines is a few minutes on foot to the south.

Takaoka is north of the entertainment/red light area of Shin-Sakae and very close to the Chinese consulate.

Kurumamichi Station is close to JR Chikusa Station on the JR Chuo Main Line with trains to Kozoji, Jokoji, Tajimi, Ena, Nakatsugawa and Matsumoto and Nagano in Nagano Prefecture as well as Nagoya Station. 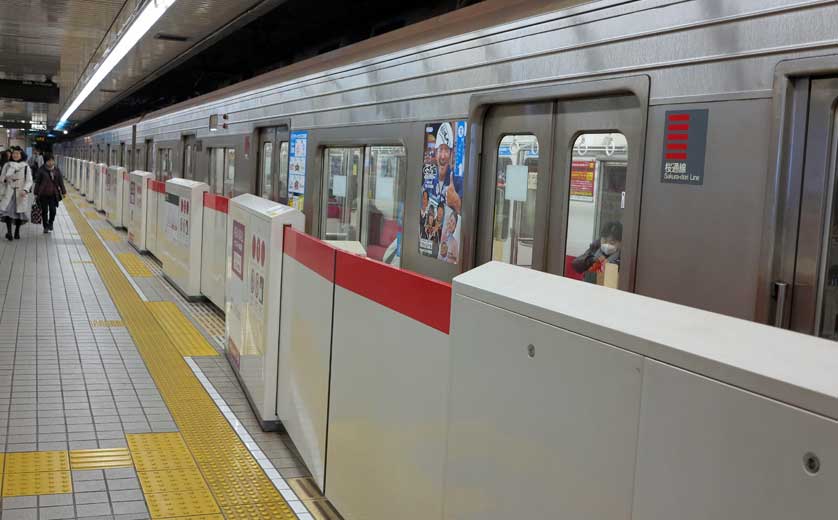 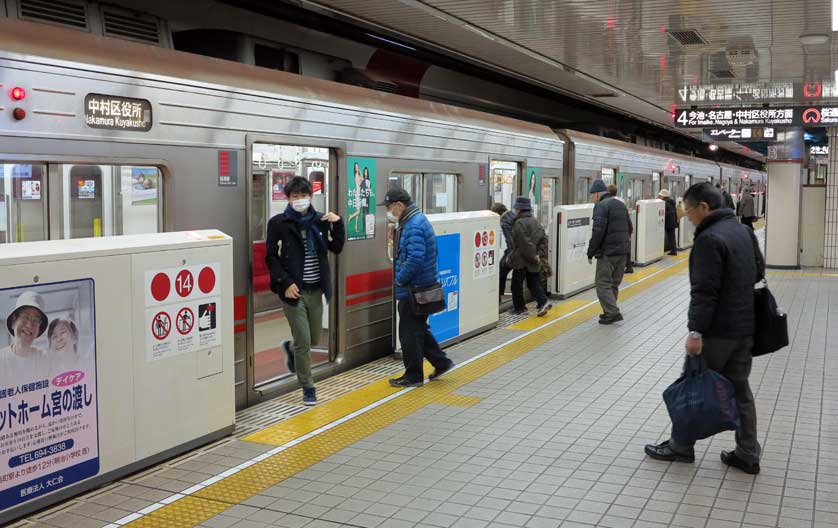 Imaike Station is also on the Higashiyama Line of the Nagoya subway and Imaike is a lively entertainment area.

Fukiage Station is convenient for Fukiage Park and the Nagoya Showa Sports Center and pool.

Gokiso connects with the Tsurumai Line. Gokiso is a small shopping and dining hub with a few interesting cafes and restaurants.

Mizuho Undojo Nishi Station is west of the Mizuho Undojo which contains a soccer stadium for Nagoya Grampus, the city's J-League team, a rugby field and baseball stadium. 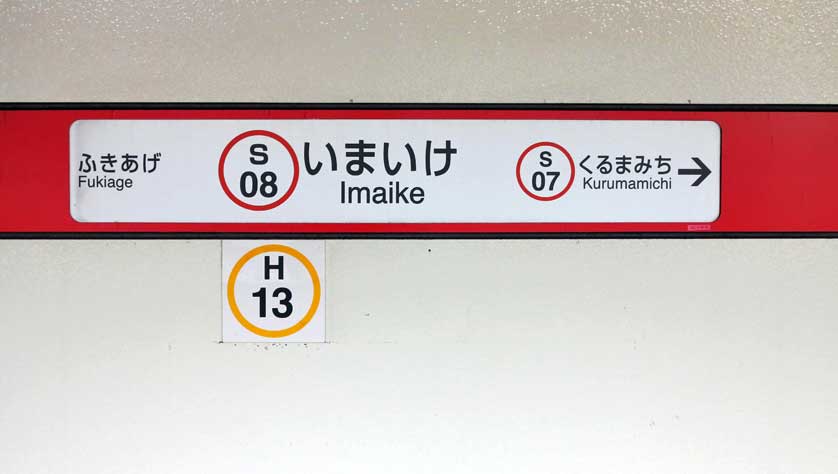 Aratamabashi Station is an interchange station with the Meijo Line.

Tsurusato Station is in the deep south west suburbs of Nagoya.

Nonami Station is also in the heart of the southern suburbs.

Aioiyama Station is located in the suburbs near Tokasa Pond.

Kamisawa Station is located in a deeply suburban housing area. 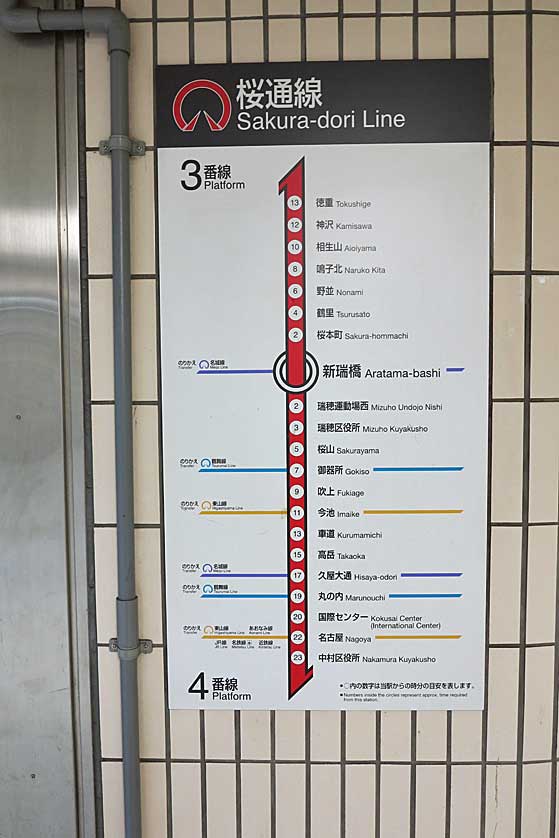 There are thoughts about extending the Sakura-dori Line even further at both ends of the line.