Use your Japan Rail Pass in Kyoto 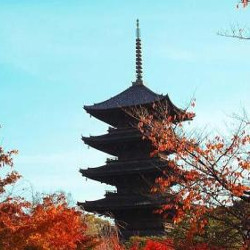 A trip along the Sagano Line from Kyoto Station to Saga-Arashiyama is the best way of making use of your Japan Rail Pass.
0 KM - KYOTO STATION
Toji temple is located a 15-minute walk south-west of Kyoto Station. A popular flea market is held on the 21st of each month in the temple’s grounds from early morning until around 4:30 p.m. The lively market is crowded with vendors on the plaza and in the park that surrounds the temple grounds. A wide variety of new and second-hand goods are on sale, including clothes, tools, sculptures, kimonos, antiques, pottery, toys, food and plants. Toji’s five storied pagoda, erected in 826, stands 57 meters tall, making it the tallest pagoda in Japan, and it has become a symbol of both the temple and Kyoto, as it can be seen from many locations across the city. 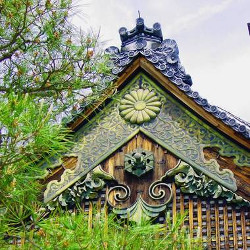 4,2 KM - 0H06 - NIJO
It is the nearest railway station to Nijo Castle. The castle is one of Kyoto’s best attractions and has beautiful landscaped gardens in addition to the Ninomaru Palace, which served as the residence and office of the shogun during his visits to Kyoto. Originally built in 1603 as an official residence of the first Tokugawa shogun, Ieyasu, it is well preserved and, unlike the imperial palace, visitors are allowed inside. An unusual feature of Ninomaru Palace is the ‘nightingale floor’, so called because the floorboards that run along the side of the building ‘squeak and creak’ when you tread on them. On your way out through the gardens, look out for the koi carp in the central pond. 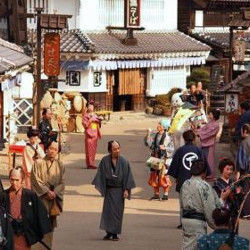 6,9 KM - 0H11- HANAZONO
Located about 15 minutes by foot from the station, Toei Eiga-Mura also known as Kyoto Studio Park or Movie Land,is a film set and theme park in one. The park has several other attractions and amusements for guests to experience, including ninja performances, a ninja maze, a 360-degree 3D theater ,filming demonstrations, and a haunted house that is claimed tobe one of the scariest in Japan. 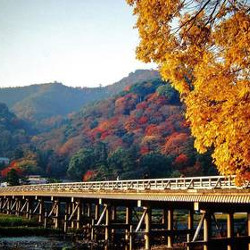 10,3 KM - 0H16 - SAGA-ARASHIYAMA
The scenery in the bucolic Arashiyama District is particularly gorgeous in the spring and autumn. Walk straight down the roadfrom the station until you reach the river. Turn right and continue walking, passing Sunday’s Sun, a family restaurant with good views of the river and reasonable prices, until you reach Togetsukyo-bashi (Crossing Moon bridge), a traditional-style bridge first built in 836. The Togetsukyo-bashi bridge is a famous spot for cherry blossom viewing (the ‘hanami’ celebration and for red autumn leaves viewing the ‘momijidani’).

The Sagano Torokko Station is a short walk from the JR Arashiyama Sagano Station.  It is the station departure for the Sagano Torokko or Sagano Romantic Train, this retrofited old-fashioned stream train which takes you beyond Arashiyama for a perfect escape from the busy cities and crowded spots of the rest of Japan.

What to see ?
KINKAKUJI (GOLDEN PAVILION)
Located in Northern Kyoto, the Kinkakuji or ‘Golden Pavilion’ is a Zen temple whose top two floors are completely covered in gleaming gold leaf. Its breathtaking beauty makes it one of the most visited places in Japan. The Golden Pavilion is set in a magnificent Japanese strolling gardenand looks over a pond, called Kyōko-chi (Mirror Pond), thatreflects the building.
Access : Take the Karasuma Subway Line to Kitaoji Station (15 min,¥250) and take a taxi (10 min, around ¥900) or bus (10 min, ¥230, bus numbers 101, 102, 204 or 205) from there to Kinkakuji.
Open daily, 9 a.m. to 5 p.m., ¥400.

Ginkakuji is a Zen temple along Kyoto’s eastern mountains of Higashiyama. It is composed of the Silver Pavilion itself and also half a dozen other temple buildings, a beautiful moss garden and a unique dry sand garden. Despite its name, the Silver Pavilion was never covered in silver. Instead, it is believed that the name arose as a nickname to contrast it with the Golden Pavilion.
Access : Bus number 5, 17 or 100 from Kyoto Station, 35-40 min, ¥230 one way. By foot along the Philosopher’s Path from Nanzenji, 30-45 min.
Open daily, Mar-Nov 8:30 a.m. to 5 p.m., from Dec-Feb 9 a.m.to 4:30 p.m., ¥500.

Gion is Kyoto’s most famous geisha district, filled with shops, restaurants and ochaya (tea houses). The traditional wooden houses (or ‘machiya’) that line the cobbled streets give the district its typical atmosphere. The most populararea of Gion is Hanami-koji Street a typical though expensive place to dine. Many of the machiya houses there now function as restaurants.
Gion can be reached from Kyoto Station by bus number 100 or206 (20 min from Kyoto Station, ¥230). Get off at Gion bus stop. Alternatively, the closest train stations are Gion Shijo Station on the Keihan Line and Kawaramachi Station on the Hankyu Line.

Paved with cobblestones and lined by cherry trees, the Philosopher’s Path is a charming pathway through Higashiyama District. For about two kilometers, it follows a canal and passes by restaurants, cafes, boutiques andmany small shrines and temples, starting from the Silver Pavilionand ending close to Nanzenji Temple. It will take you about 40 min to walk down the entire pathway. In April, the path becomes one of the city’s most popular cherry blossom viewing spots.
Access : To reach its southern end, head to Nanzenji Temple located a 5-10 minute walk from Keage Station on the Tozai Line. To reach its northern end, take bus 5, 17 or 100 from Kyoto Station

The Kiyomizu-dera is perhaps the most famous of Kyoto’s temples. With its impressive veranda jutting over the valley and supported by 13-meter-high wooden columns, the temple’s outline is engraved in the minds of Japanese people. The view of Kyoto you can appreciate from this platform is breathtaking, but not as impressive as the view of the temple during its fall illuminations, when the surrounding trees are glowing with red and orange and the main hall seems to be floating on a sea of fire.
Access : Bus number 100 or 206 from Kyoto Station (15 min, ¥230). Get off at Gojo-zaka or Kiyomizu-michi bus stop, from where it is a10-minute uphill walk to the temple. Alternatively, Kiyomizu-dera is about a 20-minute walk from Kiyomizu-Gojo Station on the Keihan Railway Line. Open daily, 6 a.m. to 6 p.m., ¥300.

This market is the best way to immerse yourself into Kyoto lifestyle. Seafood, fresh and fried tofu, local vegetables, dried fish… do not hesitate to taste the samples when they are offered to you: it could only be a pleasant surprise. As you walk across the covered alleys, you will eventually get hungry and stop at one of the dozens of snack stands in the market. It is the perfect place to try sashimi (raw fish) or soy ice cream.
Access : The market is a 5-minute walk from Shijo Station on theKarasuma Line.

The park is home to the Imperial Palace, which was occupied until 1868. You can visit the extensive gardens freely or take a tour, but you cannot go inside the buildings. The walk is still well worth it.The park entrance is located between Marutamachi and Imadegawa Stations on the Karasuma Subway Line.

Founded in 1164, the temple houses no less than 1001 statues of the bodhisattva of compassion, Kannon. This incredible building was also the site of traditional archery competitions.
10 minutes by foot from Kyoto Station. Open daily, 8 a.m. to 5p.m., ¥600.

The landmark of the Gion geisha district and the largest Shinto shrine in Kyoto, Yasaka Shrine is not to be missed. Follow the bright, vermillion gates to visit the heart of the shrine, where hundreds of thousands of visitors go to ring in the New Year, then to its garden, Maruyama Park, home of an incredibly old and picturesque weeping cherry tree.
Access : Take Kyoto City bus 201, 203, 206, or 100 (¥230) to Gion.
Open daily, free.

Located in western Kyoto, the zen temple Saiho-ji is better known by its nickname Kokedera, or Moss Temple. Entrance is limited and by written invitation only, but visitors are treated to a true Buddhist experience: before entering the stunning moss gardens, one must participate inmeditation or sutra copying with the monks!
Access : Take Kyoto Bus 73 or 83 to Kokedera. Entrance by invitation at one predetermined time per day. To apply, send a postcard with an international reply coupon with your requested date of visit and number of people.¥3000.

Where to Stay ?
RYOKAN KYORAKU 旅館 京らく Located in the center of thecity, this ryokan is only a seven minute walk from the North Exitof Kyoto JR Station.
231 Kogawa-cho, Shichijyo, Akezu-dori, Shimogyo-ku, Kyoto,600-8149
Tel : 075-371-1260 / www.ryokankyoraku.jp/en.index.html

ARANVERT HOTEL KYOTO アランヴェールホテル京都 Located only a few steps away from Gojo Subway Station, this modern hotel offers a restaurant, a public bath and rooms with a view upon the mountains and the roofs of Kyoto.
179 Higashi Kazariya-cho, Gojyo Street, Shimogyoku, Kyoto,600-8107
Tel : 075-365-5111 / www.aranvert.co.jp/en/

Where to eat ?
OMEN おめん Kyoto’s most famous store for udon, its omen udonset comes packed with spices, vegetables, and other toppings fora great noodle experience. From Ginkakuji Temple, turn onto Shishigatani-dori. Omen will be on your left after about 2 minutes.
Open daily, 11 a.m. to 9 p.m.
Tel : 07-5771-8994 / www.omen.co.jp

SUMIYAKI AKARI 燈 Yakitori with a great ambiance and unique menu options, meant to be paired with wine. From the south-sideof the Imperial Palace (Marutamachi-dori), walk east towards theriver for 2 minutes and turn right to go down Teramachi-dori.
Open 5 p.m. to 11 p.m., closed Sundays.
Tel : 07-5255-1390 / http://sumiyaki-akari.jp

GIRO GIRO Giro Giro, originating in Kyoto, is becoming knownworldwide for its delicious take on Japanese cuisine. Experiencea traditional Kyoto kaiseki-style meal with a modern flair and a reasonable price. 5 minutes from Kiyomizu-Gojo station on the Keihan line train.
Open daily, 5:30 p.m. to 11 p.m. except the last Monday of every month.
Reservations essential. Tel  : 07-5343-7070 / www.guiloguilo.com

your journey to Mount koya

Explore the natural landscape of Kyoto with a ride on the Sagano Scenic Railway with your JR Pass. Order your Japan Rail Pass today - available in 7, 14, and 21 day passes.

IC Cards can now be used on Kyoto City Buses. Learn how this can help your travel with your Japan Rail Pass.