How to go from Beppu to Aso ?

The train Aso Boy with a Japan Rail Pass

How to go from Beppu to Aso ? The train Aso Boy with a Japan Rail Pass. 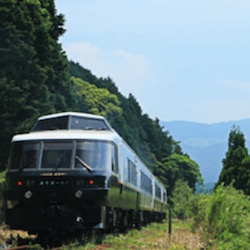 From Beppu you can reach the Aso Caldera with the train Aso Boy or the train Kyushu Odan Tokkyu. There is only one direct train per day (departure from Beppu - 10h05, departure from Aso - 15h11) .

Beppu is the second most volcanic area in the world, after Yellowstone, with over 3 000 onsen (hot springs) peppering the city with their pearly plumes of steam. See below for more information.
12 KM - 0h10 - OITA station
Japanese come from all over the country to the hot spring city of Oita, a busy port on the inland sea, facing the island of Shikoku, to enjoy the famous fugu (puffer fish). Change here to the JR Kyudai Line for the small hot spring resort town of Yufuin.
From Oita station you can reach Fukuoka (Hakata Station) with the Limited Express Sonic. 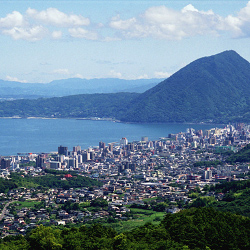 60 KM - 1H15 - OGATA(OITA) station
Nearby Harajiri Falls is nicknamed the Oriental Niagara, but at only twenty meters high, they are a bit smaller.
85 KM - 1H45 - BUNGO-OGI station
The beef of the Bungo Region rivals any in Japan. Do stop here for lunch if you have a chance.
107 KM - 2H10 -MIYAJI station
Once a year, tourists and locals gather at Aso Shrine for the Hifuri Shinji Fire Swinging Ritual. The shrine is a twenty-minute walk north of the station. 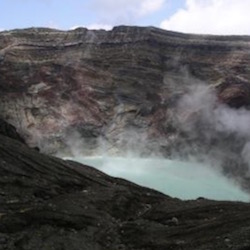 110 KM - 2H15 - ASO station
MT. ASO is one of the most impressive volcanoes in Japan and the caldera has a circumference of over 100 km. Within it there are five active volcanic peaks. As these are active, there are sometimes closures due to build-up of volcanic gas. We would advise people with breathing diffiiculties to pass on this. The most accessible of the five peaks is Mt. Nakadake, which is accessed by a 40-minute bus ride from Aso Station and then either a ropeway or a 30-minute walk. On reaching the top you can look into the crater and see the volcanic energy at work and you may even recognise some views from the James Bond film ‘You Only Live Twice’.

What to see ?
ONSEN
For a traditional dip tryHyotan Onsen with its ‘bury yourself’ sand bath and waterfall massage shower or, for a more modern but nonetheless Japaneses oak, try Suginoi palace, where you can bathe with a panoramic view of Beppu. If you are not going to be traveling down to Kagoshima, here is the place to have a hot sand bath on the beach.

HELLS
After a thorough soaking, make your way to one or twoof the ominously named ‘hells’; eight spectacular hot springs forviewing rather than bathing. There is no need to see all of them but don’t miss the vivid blue Umi Jigoku (Sea Hell) surrounded by a beautiful garden and free onsen foot bath.

Where to stay ?
SUGINOI HOTEL 杉乃井ホテル
Sprawling ryokan resort nestled in the western hills of Beppu. Rooms of all sizes and prices, aswell as a giant onsen with views of the whole city and the ocean.E1 Kankaiji, Beppu, Oita, 874-0822
N09 7724 1141 / www.suginoi-hotel.com/english/

CHIKUDEN 別府北浜季節料理ちくでん
Delicious mackerel sushi that changes depending on the local fish in season. From the east exit of Beppu Station, walk down the main Ekimae Road, take the fourth right, then the second left onto Shingu Street.
Open daily, 5 p.m. to 11 p.m.
09-7725-2277 / www.chikuden.com

How to go from Fukuoka to Kumamoto ?

How to use Hyperdia?

How to exchange your JR Pass

Hyperdia, what is it?

Discover how to use this search engine in order to plan your itinerary and find all the train times.